Why You Should Treat Other People Fairly 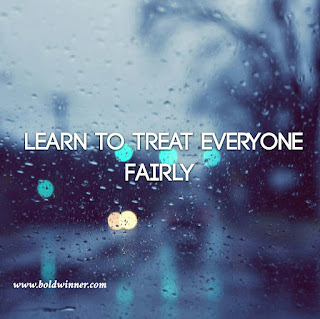 I was opening an account in a bank yesterday just before the closing hours, when I overheard the bank manager expressing his annoyance at how some of the customer care personnel treated a woman who just came to carry out some important transactions.

The woman had reported to him that the bank staff who were meant to attend to her did not even show any courtesy or smile when she was trying to get them to attend to her.

At this point, a thought came to my mind, "Is it necessary to know if the woman was the regional manager or not?" "Why don't you treat all customers fairly, so you won't bother about such surprise visits?"

The thing is that most people seem to show respect and courtesy to whom they feel is important. Other people who they don't know too well or who may seem insignificant do not bother them.

Probably, people tend to do this because they feel they can only gain from the people who are already successful but not from 'ordinary' ones, forgetting that no one knows tomorrow.

A person you disrespect today because you think he/she is not important may turn out to be someone prominent tomorrow. How would you face that person if you should meet them in future?

That person you think has no money may own billions later and be in charge of things you never imagined. Why would you treat them unfairly now?

Let us come to terms with the fact that the world is constantly changing and no one knows tomorrow! We must learn to treat everyone fairly, rich or poor, Christian or Muslim, white or black, citizen or foreigner, young or old.

The bank manager finally let them know that such a reason wasn't an excuse and as staff, they had to treat everyone that comes into the bank with respect and courtesy or else disciplinary measures will be taken to punish defaulters.

People don't need to be told to respect everyone they see. They don't need to be reminded of disciplinary measures if they don't. They need to make this attitude a part of their everyday lives.

It's not just in the bank. You should have this attitude everywhere you find yourself. Whether at the market, club, sports center, locality, street or anywhere else. Treat people fairly.

Think about this and make a decision to change your attitude towards other people. Keep winning!