How To Deal With Angry People 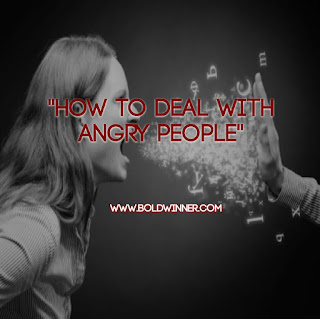 Today, I was woken up by a loud banging on my door. And a familiar voice calling out my name. I went to open the door and I met with an angry neighbor. She got upset over a very little issue which we had agreed to resolve in a few days.

But I was surprised at the manner in which she was speaking about the same matter. I should have gotten angry too, shouted back at her and even get pissed off. But instead, I was quiet, looked at her in the eye and asked in a calm voice , "What is the matter? Why are you acting this way?"

This seemed to noticeably calm her down a bit and she continued talking about this and that. I was quiet the whole time and when she was done, I reminded her that I thought we had already sorted things out and I wanted to know why she was so angry all of a sudden. She continued saying some things at which I kept quiet and did not reply.

After that she left and went back to her room. I didn't take any of her words seriously, so I continued with my day as normal. And then after some time, I decided to see her. I knocked on her door, smiled and asked to speak with her.

She was calm this time and I let her understand that I wasn't really happy with the way she reacted this morning and explained things to her over again while reassuring her that things were already in place. To my surprise, she apologized for her reaction and said there was no problem.

This experience really taught me a lot. What if I had also reacted at her in the same way when she was angry? What if I let her anger affect me and make me also act irrationally?

I realized something. Anger feeds anger. If you react to an angry person with anger, it simply fuels the other person's anger and the cycle is continued.

The best way to deal with angry persons is not to take their anger seriously and give them some space. Then once their anger has subsided, you can go and talk with them in a reasonable way. This strategy really crushes their spirits and makes them very calm. Angry people are not as tough as they may often appear.

Learn to ignore angry people and meet them with a calm nature. Give them some time to let their anger pass away, then meet them. You'll be surprised to find that the angry person will be willing to listen to you when you refuse to get angry at them too.

There is no gain in getting angry at anyone or anything. You should show that you're not happy with something occasionally, but don't get angry at a person who is also angry. You may do something stupid or say unreasonable things that you may regret. It takes strength to stay calm with an angry person and calmness triumphs over the storm!