Why You Should Embrace Unity 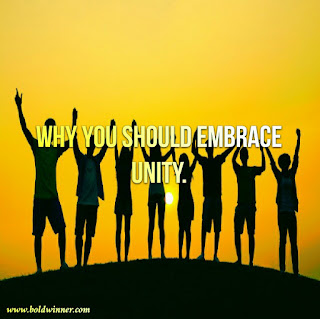 In our daily lives and struggles, we often tend to often face our problems just individually and we forget that if we should always face our problems collectively, our chance of solving them becomes much higher.

A friend of mine shared this story with me which goes a long way to explain what I'm saying:

"A group of 50 people attended a seminar and while they were listening to a particular speaker, he paused, brought out a container and started giving each person a balloon from it. The balloons were of the same color.

Each of the participants was asked to write his/her name on it using a marker also shared to all. Then all the balloons were collected back from them and put in another room.

After that, the same 50 participants who had written their names on a balloon were told to go onto the room where the balloons were kept and find the ones that had their respective names written on it. They were given five minutes to find it and a reward was promised to those who successfully found it.

Everyone was frantically searching for their names, pushing and colliding with each other, and there was chaos in the atmosphere. Some balloons burst in the process and some others were getting angry at others for blocking them.

It happened that at the end of 5 minutes, no one was able to find their own balloons. They were all disappointed when the time went up.

Now the exercise was repeated, but this time in the room, each one was asked to randomly collect a balloon and give it to the person whose name was written on it.

Within a much shorter time, everyone had their own balloons. It was very simple. The participants simply picked any balloon and called the person whose name was on it and gave it to them.

The speaker began: This is exactly what is happening in our lives. Everyone is frantically looking for happiness, wealth and opportunities all around, not knowing where it is.

Our happiness lies in the happiness of other people. Help them find their happiness and you will get your own happiness too. And this is the purpose of human life... Learn to put a smile on someone's face, and you will also in due season."

I'd love to add that your chances of finding what you want in a World full of problems and opportunities are slim. Yes, you can still find it, but it may take a much longer time which could be saved by a combined effort.

Think about it. It's simple probability. Three people working together and looking out for opportunities that match themselves have a higher chance to find it over one person looking for just one opportunity.

Learn to work with other people. This doesn't mean you should depend on them, but rather be interdependent. That is you depend on them and they depend on you too because you are all working towards a unified objective. It should not be one sided. Still respect your independence, but learn to embrace interdependence.

We'd be shocked at how easily we will achieve our goals if only we are much better united. In unity lies strength. A wise man once said, "It's easier to break a broomstick when it's alone than when joins forces with others to make a full broom."