The Only Time When You Truly Fail 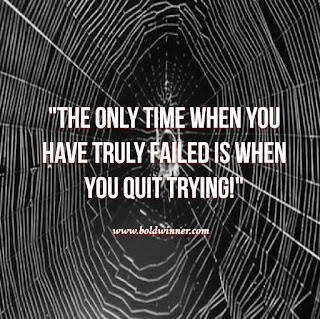 I came across this story online which really made me think deeply about how we respond to failure and what it takes to be successful. Here it goes:

One night, a spider found a tree to spin its web on. It had worked all day to spin a big, strong web and decided to get some sleep. The next morning when it woke up, it saw that the web had been torn to pieces. The wind had blown so strongly at night.

The spider had nothing to eat as nothing was caught by the web. When the wind swept across, the spider asked “Wind, why did you blow down my web?” The wind responded with two words, “You’ll see,” then left.

The spider set back to work. It worked all day, making sure its new web was twice as big and twice as strong. And went to sleep. But when it woke up the next night, the web was in pieces. The wind had blown it away again. When the wind swept across, the spider asked the same previous question and got the same reply from the wind.

The spider once again got back to work – and it was not happy at all. But it made the web even bigger and even stronger, stretching it across many branches in the tree. The spider was confident that it had spun the best web it could.

The following day, it had happened again! The precious web that it spent hours spinning was gone. When the wind came by, the spider angrily shouted, “Wind, I had spun the biggest and strongest web I could! I spent hours working on it, and still you blew it down. Why?” The wind responded with two words, “You’ll see,” then went on.

With frustration, the spider decided to spin the web again. It worked harder than ever before. It even worked late into the night. At around midnight, the web was done and the spider was even surprised at the magnificence of the web it just built.

It slept, exhausted with doing a kind of work it had never done before and woke up late the next morning. It became overjoyed. The web was still intact this time. Strong and solid.

Later that night, the wind came by again. The spider said  “Wind, thank you for not blowing down my web.” The wind replied, “I could have blown it down if I could, but you see, you have built this strong web which can resist me because you were willing to keep trying!"

Successful people have encountered failures many more times than they have met with success. What kept them pushing for their goals even in the face of the many failures? It was the willingness to keep trying!

It means that we cannot call ourselves failures based on the stumbling blocks we face on our roads to success. The only time when you can say you have truly failed is when you quit trying. When you give up working on your  endeavors, plans or dreams.

The moment you make the decision to stop trying anymore is the moment you have truly failed. There is no challenge that can stop anyone who is really persistent and determined.

If you really want to succeed in anything, then you must not stop pushing for it. The moment you stop, it stops. Your determination is what keeps you moving closer to your dreams every time.

Always see the obstacles on your path as indicators of how close you are to your success. Don't let them discourage you from trying!

I'll end with this quote: "Nothing in the world can take the place of Persistence. Talent will not; nothing is more common than unsuccessful men with talent. Genius will not; unrewarded genius is almost a proverb. Education will not; the world is full of educated derelicts. Persistence and determination alone are omnipotent. The slogan “Press On” has solved and always will solve the problems of the human race." – Calvin Coolidge