Showing posts from April, 2017
Show all

Your Own Needs Matter! 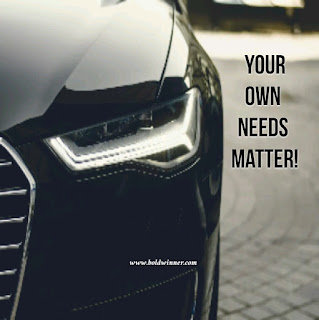 I used to be that person who always puts his needs last. I only considered what other people wanted without considering my own needs. I did this because I felt I will be liked by other people or gain their admiration. I was doing all for them and for their approval. It turned out that even though I was putting my needs behind and working for the needs of others people, I was still unhappy. I got their approval and most of them thought, "He's such a nice guy." But I wasn't happy. The prison of what other people would say or think about me kept me behaving this way for quite some time. But then I found out I wasn't living my life. I was not doing what I wanted to. Life wasn't fun for me even though I made others happy. What was the problem? I had to think deeply about it as it bothered me a lot. Then, somehow I figured out the answer: My own needs really matter. I didn't have to sweep those needs under the carpet while helping meet the needs of oth
Post a Comment
Read more

What are you too conscious of? 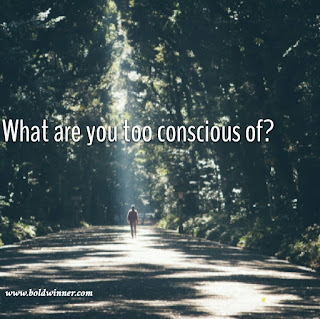 If you're not too conscious about something, others won't be too conscious about it too. A mad man isn't aware that he's naked or acting crazy. You may see him on the road for a brief moment.. You may laugh momentarily, but you don't go on thinking about the mad man or his nakedness all day. You become unconscious of him too as soon as you pass him. The mad man isn't bothered or worried as he's unconscious of himself. What are you too conscious about in your life? Some people are too conscious of their skin color, their height, their size, a torn cloth or anything at all. They keep these things in their consciousness for too long that indeed other people start noticing it. Your cloth is torn and you start walking or sitting somehow.. people will become interested in finding out why you are walking or sitting that way. You are short and everywhere you go you keep referring to your height. More people will notice, some of whom didn't care about
Post a Comment
Read more 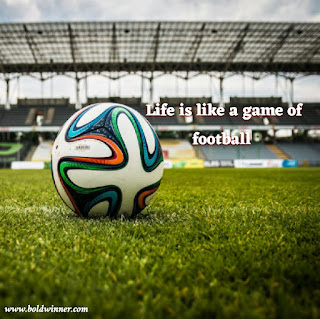 I never liked football and sometimes, I wonder what men like in the game. The worst part of it is that I don't really like green, so the colour of the field even turns me off. But one day, i decided to watch a football match and a force just got me interested and i fell In love with it. Ironically, I was not watching it with the same mindset as every football lover would watch a football match which is to know if a particular team(Chelsea or Arsenal) will win. Rather, I watched every thing that was actually going on in the field and studied it carefully. I noticed that before the match starts, each team will pray. And so once the game begins, every player would focus on the ball, I saw the passion with which every player strived to get the ball. Even when a player is with the ball, other opponent players will dribble him just to snatch that ball but he must face them and dribble them as well and try to pass the ball to his team player, why? Because he trusts that they have
11 comments
Read more

Live A life of No Excuses 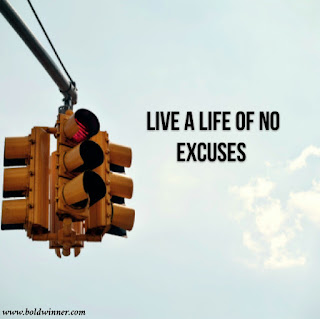 Most people have a thousand and one excuses why they are living a crappy life. You hear people say things like: "I wasn't born into a very wealthy family like X," "I'm not as beautiful or good looking as Y," "There are no opportunities around me like those in country Z," "I'm not loved like or by X," etcetera. Many people make up different excuses to explain or justify why they are still living in a disadvantageous state. The plain truth is that there is always an excuse available. You can always make up an excuse for anything at any time. Hence, if one becomes too used to making excuses, it becomes hard to overcome the habit because one never runs out of excuses. This turns out very dangerous to us. Living a life filled with excuses is only a gateway to failure and shows a high level of irresponsibility. There are really no excuses needed to live a successful life. A successful life, I think, is a life that enables the indivi
1 comment
Read more 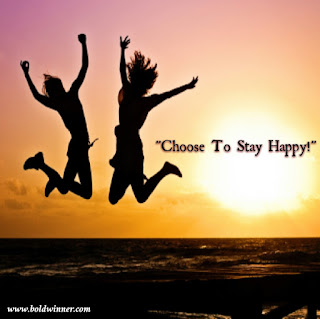 Often times in our lives when we are not achieving the results that we expect while working towards anything, we tend to feel sad, unhappy and depressed. Whenever we put in our very best and the outcome doesn't look very good, we easily lose our hope and we ask ourselves, "what's the point?" When you look at those people around you, it may appear that most or all of them are seemingly getting it right and they have made significant accomplishments and achievements. But when you look at yourself, it seems as if you have a long way to go. You begin to feel terrible about your own life and you wonder if life is playing a sort of joke on you. You start asking, "What is happening to me?" I want to share this with you if you've ever felt that way, if you're about to lose hope, if you're fed up with your own challenge, if you've lost your joy(the joy of living) or if you ever felt like giving up because of the present situation of things. An
Post a Comment
Read more

We Are Not Meant To Do The Same Things 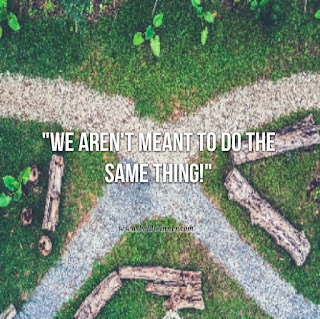 In this world, some of us think that we should do exactly what another person has done or follow exactly another person's path. We want to study the course another person studied, even when we don't like it. We want a job another person has got even when we are not talented to do the job. We want to do things in the same way another person did it. We want to be experts in another person's field and etcetera. We continue to struggle to be like someone else or do what someone else does and in the process we forget ourselves and our uniqueness. We are not all meant to be Doctors, who will be the patient? Who will rule? Who will defend the country? Neither are we all meant to be footballers, not everyone is born with the natural talent. Should we all be comedians? Who will be laughing at our jokes? Should we all become presidents? Who will lead? Or maybe we all should become bloggers, who will read our blogs? Lol. I believe you are gradually getting my point right now.
Post a Comment
Read more

Be True To Yourself! 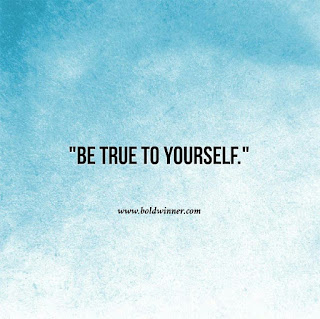 If you're like most people, you'd be very reluctant to admit your weaknesses, imperfections or flaws. You'd like to pretend to be perfect even when deep down you know you're not. . The reason behind this is psychological and ego based. We all want to appear perfect, blameless and impeccable to other people around us. That's why we like pushing the blame outside ourselves. . The danger in this instinctive attitude is that it actually does more harm than good to your efforts at succeeding and achieving your objectives. . The biblical story of the Pharisee and the tax collector kind of illustrates the danger in this attitude. Both men went into the same temple to pray to God. . The Pharisee was busy claiming to be perfect and boasting of how different he is from the 'sinners'. He was so proud of his virtues forgetting that no matter what, there is always room for progress. . The tax collector was more real. He already started by admitting the tr
2 comments
Read more

Choose To See The World Positively 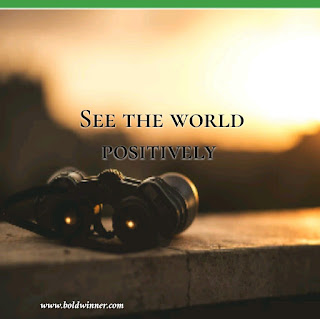 How do you see the world? What kind of a place do you believe the world to be? What do you think about everyone else? These questions are necessary for you to answer because the way you see things play a crucial role in what you tend to experience. Some people tend to have a very negative view about life and if you take a closer look at them, they tend to get exactly what they believe in. Take for example someone who believes that everyone else is out to get them. This person believes strongly that no one else really cares about them and everyone wants to rip them off. This state of mind makes them react negatively to people who may genuinely want to help them. Their reaction towards those people makes those people turn away from them and leave them on their own. And when these people turn away angrily, the one with the negative belief about people in his heart will say, "Yes, I said it. They have gone away because they do not really care about me." And inside his hea
Post a Comment
Read more
More posts