Your Power To Ignore 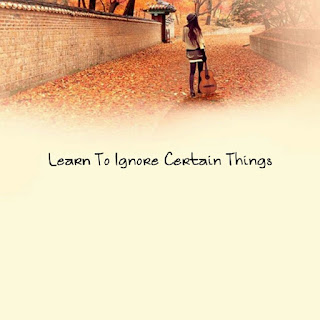 When I was a kid in primary school, some of my folks used to call me "Big Head." And anytime they said that to me; I got angry and reacted in a negative way that seemed kind of pleasing to them.

I often wondered why they did it: Was my head really that big? Was it because I occasionally came top of the class? Or were these kids plainly bent on offending me? These questions bothered me and then one day I reported to my teacher.

She smiled, looked at me and said, "Ike, anytime they call you big head again, simply pretend like you didn't hear them and continue with whatever you're doing."

To be honest, I wasn't happy with her recommendation. I expected her to flog the hell out of these kids and make them pay. Little did I know that her advice will go a long way to form some of the basic principles which I live by.

I did as she asked. It was difficult initially because when they saw that I wasn't reacting the way I used to, they intensified their efforts. But I thank my stars that I kept calm.

After some days of trial, they naturally became bored. I wasn't entertaining them anymore with my anger, so it wasn't fun for them anymore. They just had to adapt, call me my real name and found other ways to make themselves happy.

That was how that behavior came to an end. As the years went by, I can still recall similar situations where I have been called some rude names and when I plainly ignored it, it usually happened that the offender usually came back to apologize.

I cited these few examples to point out how powerful our ability to ignore certain things are. Some people have become so predictable and reactive today that anyone could easily guess their reaction to anything.

Some people flare up so easily when they feel they are offended. Others engage in arguments that waste their time and benefits them nothing. Few people are actually aware that they possess the power to ignore certain things.

Anytime we react to those things, we simply lose our direction and time for nothing. Things will happen and people will always say or do things. You can't control everybody or every occurrence, but you can control how you respond to them. You either ignore it or you pay attention to it.

Successful people who have a sense of direction and who know where they are headed usually train themselves to ignore distractions and focus on their objective. Ability to ignore is an ingredient for success.