Knowledge Without Practice Is Useless 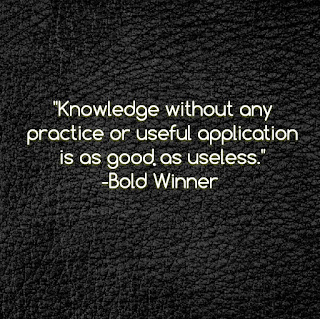 Here's Jack.. He has read almost every book on how to get rich and become very successful in life. He can tell you everything about Kiyosaki's Rich Dad, Poor Dad and even the Cash Flow Quadrant.

But Jack doesn't have enough money to feed himself, talk less of pay his rent. His trousers even have visible holes in them. He's so poor. Why is this so even with his wide knowledge on how to become wealthy?

Meet Michael, He just graduated from the University. He knows every theory and formular in the engineering field. He has proven himself by being able to memorize and give back to his teachers what they gave him.


But Michael can't even make simple repairs on his home generator. He doesn't even know how to use the tools on various engine systems. He can tell you the theories about his generator and even give you equations to solve the problem. But he can't just repair it.

Meet Lilian, she's pretty and looks good enough to slay any man. She's still single though and has read a lot of books on how to attract her dream man and win his heart. She knows all the book tricks.

But Lilian is still single and her friends who haven't read half of the relationship books she has read have been sending her wedding invitations.

What's happening? You may wonder. Is nature playing a sort of cosmic joke on these people? Is God purposely being wicked to them? Or probably their village people are at work? Lol

The answer is simple: Acquiring knowledge without any practical real life experience is useless and a waste of precious time. Gaining knowledge must be followed by constant practice for it to be useful.

Jack may have read a lot of books about entrepreneurs and getting wealthy, but how many of those principles has he put into practice in his life? Has he made attempts to start up stuff? Has he applied for opportunities to gain helpful skills?

Michael may have been one of the best in his class, but can he ever apply his knowledge to useful means? Or would he become a lecturer and start teaching other innocent students the same stuff he was stuffed with?

Lilian may be the prettiest girl and probably read thousands of love books, but has she taken some time to look into her life, character and attitude? Has she been friendly and responsive enough to learn about how the male folk think? Is she living in a dream world inside her head or has she experienced the reality?

I'll leave you to make your own conclusions as I draw the curtains here.