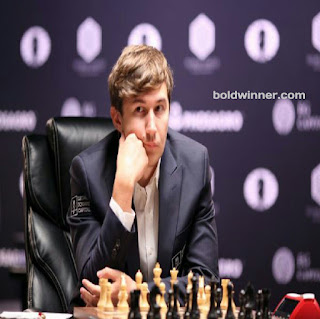 What an interesting twist of events! After 7 gruelling draws out of the 8 chess games played so far by the contesting chess masters, it turns out Sergey Karjakin, the 26 year old from Russia is the first to draw the blood in a game against Chess World Champion, Magnus Carlsen.

The game played yesterday was a tough one in which Magnus Carlsen played very ambitiously. He was really playing to win. I feel he was tired of all the draws and played very aggressively that he made some errors which led to his loss.

The Russian challenger remained calm and wasn't really perturbed by the Current World Champion's surprising moves. He kept his cool and kept playing solidly. Carlsen kept going for it, while Karjakin was just patiently waiting and defending properly. Consequently, Carlsen ignored certain principles and made errors because of that which led to his loss.

I personally have learnt a lot from this surprising game. It's not all about playing aggressively and trying to win at any cost. In everything one does, one must be calm, relaxed and do it without fuss, worry or discomfort.

Whenever we're so bent on any desired result, sometimes it makes us worry and disposes us to make some wrong decisions. No matter the results we need to achieve, we must learn to do the work required for it in a calm and relaxed manner.

I think this was the psychology behind yesterday's results: Calmness winning over Tension. There are still four games to go and the next game will be played tomorrow , 23rd November 2016.

I hope Carlsen learns his lesson and tries to remain calm in the next games. And to you reading this, in anything you do, don't put your mind so much into it that you're distracted from the present. Don't be overzealous about anything. Forget the result you want and simply focus.

Whatever you want to achieve, just calmly focus on doing what you need to do. Don't let concern for the outcome bother you. Forget about the outcome and concentrate on what you got to do presently. I tell you, nothing can stop a calm and focused mind.

Remember to stay calm and confident,

See you next time.