Are You Just Waiting Or Are You Doing? 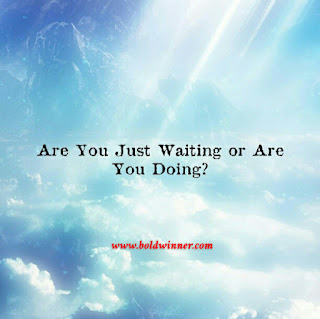 The problem with a lot of people is that they wait for God to come down himself and do stuff for them. They just fold their arms, do nothing and wait for Him to do it. It's crazy, really crazy.

I came across this short story online and I think it paints the full picture of why some people are trapped in the same damn situation.

Once upon a time, there was a man who lived in a house very close to a river. After a heavy storm, the water level rose very high and an announcement came over the radio urging
inhabitants to leave their houses before their homes were flooded.

“Oh, no,” said the man confidently to himself, “I’m a religious man, I pray, God loves me, God will save me.”

The water rose higher, and the man was forced to move into the second story of his house. A guy in a row boat came along and called for the man to hurry and get into the boat.

Finally the house was completely engulfed in water, and a helicopter swooped in to rescue the man, now perched on the roof.

Again he refused, saying, “I’m a religious man, I pray, God loves me, God will save me.” Just then, a huge wave of water swept over the house, and the man drowned.

When he got to heaven, he demanded an audience with God. “Lord,” he said, “I’m a religious man, I pray. I thought you loved me. Why did this happen?’

“What do you mean?” asked the heavenly Father. “I sent a radio announcement, a boat, and a helicopter and you still wouldn’t listen to me!”

Funny right? This is what most people tend to do. They pray ten times more than anybody in this world, but they don't do anything to take advantage of available opportunities coming their way.

I believe God has already answered most of our sincerest prayers, but have we opened ourselves up to receive it? Have we even recognized that the answer is already there?

Look at our world today. So many people complaining of hardship and an uncomfortable lifestyle. But then so many people have also been praying hard.  Why are things still not changing for better?

Let's stop waiting for anybody to come and save us from any shit. Whatever shit we've found ourselves, we should seek God's guidance but MUST ALSO try and do what we can do about it.