Have You Given Up Already? 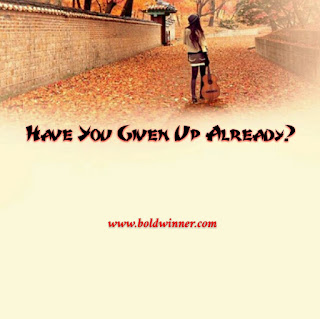 While I was playing a game of Billiards with some friends at a game center, I overheard someone complaining about how hopeless the situation in our country was. He was thoroughly convinced that nothing else could be done and there was no hope that things would ever be better.

I was just positioning myself to hit the cue ball with my stick, but when I thought about what he said and the few people who were nodding
in agreement with him, I stood up erect, strongly objected and let the guy understand that indeed there is still hope.

Yes, it's true that the situation in our country is tough, it's true that we have some corrupt leaders in power and it's damn true that life is harder for the average man, but the only thing that gives me hope is the power of human choice which can never be taken away no matter what.

Positive transformations in various parts of our world have emerged from situations that looked very hopeless. These transformations couldn't have been possible if everyone lost hope. Rather, it was brought to life by the actions of few spirited individuals who still believed that all hope wasn't lost.

You've not failed as long as you're willing to keep trying! You're never a failure if you can keep on making attempts. You only fail the moment you stop trying! To believe that we are hopeless is to deny our power of choice. And denial of our power of choice is the only thing that guarantees failure.

Look my friend, the little actions you take today plays a big role in the grand scheme of things. Our main problem is that we give up too easily and then we wait for a Messiah to save us. Truth is: No one man can save our country from its present predicament.

It will take responsibility from every one of us and the moment we choose to lose hope, we give up that responsibility! Whatever little thing you're doing that is adding value to our nation, keep doing it. You may not know how valuable your little actions are.

The child you take care of today, might be a great leader in our nation tomorrow. What will be his fate of you don't teach him properly and take good care of him?

The drug you produce and sell might be used by someone who is destined to invent something big in the nation. What happens when it's fake?

Just speaking kindly to a stranger and helping him without seeking a reward might just change his mind from doing something dangerous.

The point is that, your own actions matter and you always have a choice. Making the right choice goes a long way to create little changes in our society which you may not notice.

Let us stop giving up and becoming hopeless, let us stop complaining and blaming our leaders. Rather, let's focus on the little thing we can do to make our country better and keep doing it! Just keep doing it!
That's what we're meant to always do.

I will never lose hope in a better country and a better world because I believe that human beings can still rightly use their power of choice.

Complain less and do more.