A Day With The ATM Machine 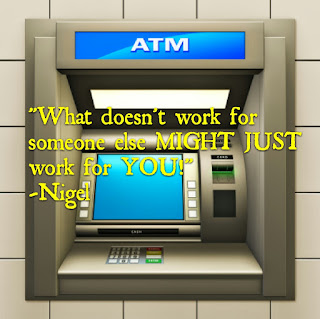 What I am about to tell you happened yesterday in my town when I went to use my ATM at a Diamond bank branch. I walked into the ATM booth with a friend of mine Daniel.

We were quite discouraged at the crowd outside waiting to withdraw money, but compared to the previous banks we've checked
out, the number of people seemed a little bit lesser, so  we stayed put.

A few minutes into when I joined the queue, I noticed most people were leaving their positions to join other lines. I asked the middle aged man standing in front of me what was going on. He told me, "This ATM rejects every Diamond Bank Card."

I was with a Diamond Bank card and after listening briefly to some others complain about that particular machine, I quickly got to the front and told Daniel jokingly, "I know I'm usually lucky in this kind of situation."

Then I put in the card, put in my password and voila! The options for cash amount appeared and I withdrew my money and left in no time. Other people who had left the line earlier on with a Diamond Bank Card started rushing back to queue up.

I looked at them, thought about it a little, smiled and left with Daniel.

Don't be quick to accept negative results for yourself based on another person's results. You are different and your moment is different. That's why it's important to keep trying.

I don't really take popular opinion seriously, I like to find out things for myself. I'll rather try and fail, than not try at all.

So why do we easily follow the path of The general opinion? Why are we afraid to give our own shot to what some others have not succeeded in? The answer lies in the force of habit and herd mentality. We naturally want to follow the crowd and believe what the crowd believes.

The funny thing is that when you go against the crowd and discover something, the crowd then follows you. Winners carve out their own path. Winners think differently. They don't just accept theories, they verify them.

Stop believing anything negative that you're told by anybody. There is thing called a success mindset. A mind that doesn't take No for an answer. A person with such a mindset is unstoppable.

Always try and keep trying even where others have failed. The worst that could happen is that you fail, then so what? At least you tried, rather than accept failure without an attempt. The best thing? You could get lucky and make massive success, then the herd follows.

To try or not to try?