The Fear Of What Others May Think 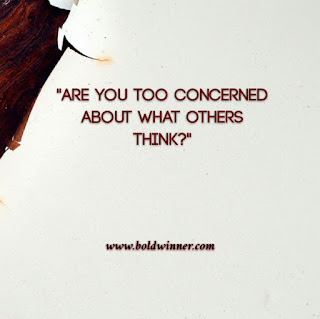 A girl played a funny prank on me recently. When I gave her my phone, she downloaded her profile picture on Facebook, logged into my Whatsapp account and changed my own profile picture with hers without my knowledge.

I didn't often log into my Whatsapp and the few times I did, I didn't bother to check my profile picture, so I was oblivious of what had
transpired for some days. It was when I started getting messages like "Is that your wife? " "You're now married? " "Who's that girl?" etc that I came to realise that.

Initially, It appeared to be something embarrassing and surprising at the same time. I started thinking about questions like "What will people think?" "How am I going to explain myself?" "How would people see this?" "What would they say about this?" And other questions like that.

Why was I too concerned about what others would think? Why was I concerned about explaining myself and proving anything to anybody? What was this need to get a certain approval from others?

It was totally baseless. There was no reason to try to explain anything to anyone and I saw clearly that there was absolutely nothing wrong with that. People can always think what they want to think, but who cares?

This fear of what other people may think about us really keeps us from being ourselves. The funny thing is that no matter how hard you try to gain people's approval, there will still be some people who will say something different about you.

The main thing is that you know yourself and what you're doing. Allow people to think anything they want to think, it's actually none of your business and there is nothing you can do that will force them to think of you in just one direction.

At the end of the day, your conscience is there to tell you who you are. It's not dependent on what other people say, it's dependent on you and you alone.

In conclusion, I enjoyed the prank. It helped me learn about some of my thought processes that seemed outdated. I understood that there were bigger things to do with my time than try to explain myself or to prove anything to anyone.

Free yourself from what people may think about you and free yourself to be truly who you are.

It was an enlightening shift in perspective.