Become The Actor In Your Movie 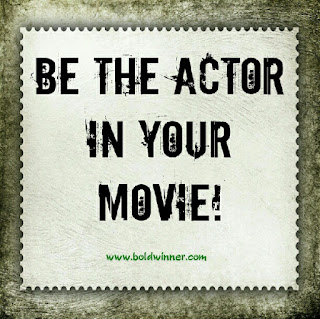 This world is just like a big movie in reality. There are many different scenes of the movie playing out in different locations around the world.

Only God can watch every part of this complex movie. Each individual only watches a unique part of the movie which can NEVER BE watched by any other person but the individual. Think about that for a second.

Everything going on around you is watched by you uniquely! Even if someone had been going to the same places with you all your life, you
both still do not see exactly the same thing because your positions in time and space will always differ.

You're an actor in the movie you're watching which is your personal movie. It's your choice to play any role you want to play as the actor. It's also your choice to look and watch others act without acting.

Think about a world where everyone is an actor in the movie they watch. How would that world be? If you become an actor in your world, you inspire others to become actors in their own movies.

Different people around the world at different places are experiencing different things. Somewhere right now, gun shots are being fired. Somewhere, a new baby is born, somewhere people are laughing, drinking and happy.

In another place, people are mourning and unhappy. All these parts of the big movie are happening simultaneously. You can't watch it all because you can't escape your own movie and live in other people's realities.

So take your own movie seriously, observe what's really going on in your movie and decide to be an actor. That's what really matters, because you can't run away from it.

You're an object in other people's movie. Therefore if you start acting, you start creating change in the movie watched by those around you. You inspire them to act as well.

I think if we understood our individual movies well, we will be able to know the role well are meant to play and start playing it.

Problem is that many people are not paying attention to it. They waste time trying to be like other people but themselves. They hate the movie they watch because they've not understood it. So they want to escape it.

This is your life! God has decided to place you in whichever part of the world you find yourself, so that you can watch a unique movie there and play a role there.

Your role is very important in this world. I don't know how to stress it. You are not here to just live and die. There is something that you have within you which the whole world is waiting for. This thing is your role in the movie. You must ACT ON IT!

The world waits for it badly. The world is really lacking enough ACTORS. Many people let fear stop them from acting their part. But in reality, fear will make you die empty.

Take time to reflect on whatever kind of movie you're watching in your life. I don't know what you're passing through right now or the things you're experiencing.

One thing I know for sure, is that no matter what, God has designed you for a beautiful role in that movie. Just find it, trust your gut and play it. Just keep playing it.

Be the actor in your own movie today. :)