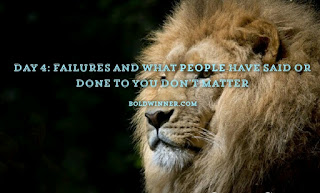 "I want you to always keep in mind that you are too big to be a dwarf, too loaded to be a mediocre. Many times, we limit ourselves because we do not know the potentials that lie deep and untapped within us.It does not matter if people have said or done things to condemn you in the past.

You have your future to prove every one of them wrong. The legendary Henry Ford, the owner of Ford Motors was nothing to be reckoned with in the academics, but he turned out to become a genius in the automobile industry.

When Henry went to school and failed, he was encouraged to learn bicycle repair. There he developed until he became a Motor Manufacturer. At the age of forty, he ventured into car manufacturing, and against all odds he became the household name we know today. By the time he was sixty years of age, he was one of the world’s richest men of his time! Believe in yourself and make your life count. You can do it!"
-N.Adesanya

Your resolution to excel and prosper in life shouldn't be defined or shaped by what people have said or done to you(Best to forget them entirely). It shouldn't even be shaped by the failures you've encountered on your journey.

As a matter of fact, anytime you fail, you should pat yourself on the back knowing that you've gained additional experience that can help you and that you're better off than those who haven't even tried that same thing at all.

The fact that other people have called you a failure, a good for nothing, a useless person or a lowlife in the past doesn't matter. It doesn't count and it should never count in your life if you're a bold winner. People can say whatever they feel like saying, but what is important is what you're saying to your own self. How do you perceive yourself?

If you've failed many times and people call you a loser, the worst thing you can do is listen to them and ALSO call yourself a loser. If you've understood the whole concept of what vast potentials you possess as a unique individual, you will see that listening to people's words or feeling defeated during a failure doesn't help you at all.

You've got to believe in yourself. And I'm not here to give you some motivational speech which you'll probably forget soon enough. I'm here to tell you that motivational speeches won't help you if you don't even believe yourself and if you've let your mistakes or people's words destroy that quintessential belief in your own self.

It's so important you believe you can. It's so important that you don't dwell on any negative thing from the past because it stops you from experiencing the present and creating your future. You should be new every moment. Your belief in yourself should be refreshed and renewed daily.

When you continually do this, you will see tremendous changes happening in your personal life and you will build a formidable self - esteem.