On The Rise Of Feminism And Gender Equality 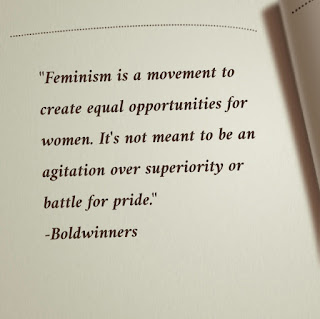 I have been quiet about this whole argument and fuss over gender equality and feminism. Equality does not mean that men and women are the same.
.
We are obviously not the same. Look at a man and a woman and you'd clearly see we are not the same.
.
Equality in that sense means that Men and Women should be given equal opportunities. Women could do some things better given the same opportunities.

.
No one is superior to the other. We both have roles to play. Women are specially gifted in certain roles than the men. The men are also specially gifted for certain roles than women.
.
Neither gender needs to claim that they are superior to the other. It's useless. No need to compare.
.
We are wasting time with all the talk about feminism and gender roles. Women focus on doing what you're more inclined to do. If you want to do what men have proven to do better, fine, come and join us and prove you can do it better.
.
Same goes for the men, let's focus on doing what we have proven to do better. If we want to compete with the women in their natural roles, fine(We can start with childbearing).
.
Feminism needs not to be feared. I feel the reason why some men are bothered about it is that they are afraid that the women will perform far better than them when given the same opportunities.
.
Men don't need to be afraid of that. Let the women keep trying their best. If they succeed in playing your role better than you, so what? You shoot yourself?
.
It even helps the society. You don't need to fear it.
.
My only case against the rise of feminism is that some feminists are trying to claim that they are superior to the men.
.
That is the problem with both men and women. Claiming superiority. No need to claim superiority. The equal opportunities are being created. If you can perform better, do it for the betterment of society and not to prove you're superior.
.
No need for that. Enough of these mind games. Give the feminists the same opportunities, let them try.
.
Men should relax too and focus on their work. Fighting for superiority is a waste of time.
.
Our goal should be improving our society. Let's give everyone an opportunity to do that. We are not here to fight over who is more superior. We are here to improve this earth and not fight.
.
Women are special, beautiful and delicate. The world would've ceased to exist without them. They have a role to play here. It doesn't mean they are better than men.
.
Men too are here for a wonderful reason. God is not an author of confusion. Men have played many roles in civilization. It doesn't mean they are better than the women.
.
Both genders have proven to be important. No need to fight and claim nonsense over the other.
.
I am Nigel. And I'm trying to make common sense.