Life Rewards The Bold And Courageous 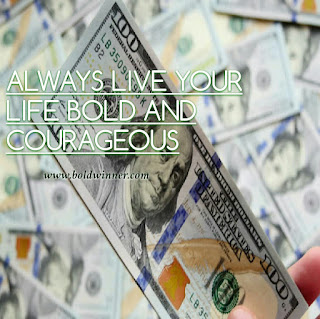 I just learnt about a man, who was making a presentation to young adults at a seminar. Towards the end of his speech, he brought a $100 bill and told his audience that he would give out the money to one of them.

He continued, "This money will be given to one of you who really wants it. " "So which of you really wants this money? "

Lots of the young persons listening to him raised up their hands in lightening speeds. Some others waved two hands while a few of them stood up also raising their hands.

But then, there was this young girl that did something different. While others people were busy screaming, standing and raising up their hands waiting to be given the money, this girl
made a very bold move.

She quickly ran up to the stage where the speaker was standing and took the money from his hand. The speaker paused for a bit and looked at her, then he smiled and said "You've proven to be the one who really wanted the money." "It's all yours."

Other people started talking(which they will always do when you're progressing) ... Why did she have to go up to the stage and not raise her hand like everyone else? Why didn't she wait for speaker to select randomly from the crowd? Bla bla bla...

All these things were mere rantings. The point is that the young girl is going home with $100 and nothing else can change that.

If you're bold and courageous, you'll realise that you can have everything you need and it is very much within your grasp. But Fear has always been your enemy. You are too afraid and that's why you've not seen that you have these things yet.

Think about this for a moment. I wonder what the life of Nelson Mandela would've been like if he listened to those who tried to stop him from fighting segregation.

What if Bob Marley was afraid to produce his music? What if he was concerned about the content of the political message passed to the audience through his songs? Would anyone have known him?

What about others like Martin Luther King and Oprah Winfrey? What would be said about their lives if they were not bold enough to express what they truly felt?

The answer is nothing! If these people were afraid of being themselves and doing what they had to do, nobody would've cared about their existence. They would've lived and died without contributing much to society just like many others.


Often times, you may wonder why you're stuck in the same place. Why are you not making progress? What is keeping you from succeeding?

You have been hiding your true self because you want to fit into the 'normal' category. Here's the thing: No one ever achieved anything reasonable by being normal, average or regular.

You go beyond normality to become extraordinary.
And it is only when you have gone beyond normal that you can make significant progress which doesn't just benefit you, but inspires and benefits every other person around you.