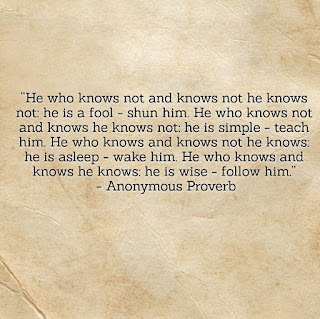 "Papa, I can fix this thing, am I not an engineering student?" Johnny replied ignoring his father's suggestion. It happened that Johnny was mildly electrocuted and he was lucky it was just mildly.

"Did it shock you?" came the question from the father. He must've heard some sparks and his son's muffled scream.

"No Papa, it did not shock me o, let's just wait for the electrician to come." replied Johnny, who has been humbled.


Some of you may be familiar with the above scenario. It was used to make a short comedy video. But stuffs like this happen in everyday life.

Sometimes we claim to know too much, when we don't actually know. In a bid to appear in a certain "knowledgeable" way to others, we tend to overlook simple advice and try to do things we don't know.

You've probably found some fault with a system and when you tried to contribute your knowledge, you get the response "Are you saying I don't know what I'm doing? " or you'd even be ignored. Then something finally goes wrong and it turns out you were right.

Knowledge is wonderful. It has helped us to know things, to discover, build and create. Knowledge has helped us overcome a lot of mistakes and enabled us progress as humans.

But knowledge can also have a dangerous side. When your knowledge prevents you from listening to other people's opinion or stops you from considering any other possibility, it becomes dangerous.

You become stubborn and adamant, you won't listen to anybody else because you are too sure of what you know and that could lead you to trouble.

When a tea cup is filled to the brim, fresh tea can no more go into it. This can be likened to when knowledge becomes a barrier to our learning.

In reality, knowledge should be a continuous process. It should keep growing and updating. Let no knowledge put a limitation to the entry of new knowledge.

Your mind should be open to all possibilities. Only then will you be in a better position to take any course of action. When knowledge limits you, you cannot possibly make the right choices, because you can't even see them.

You then get to always choose from the option you claim to know, ignoring a wide range of options.

Have you ever worked with people who claim to know too much? It's one of the most frustrating things. What I do when I meet them is to simply relax and let them make the mistakes they want to make.

That's the best way to teach them, because these kinds of people won't want to listen to whatever you want to say. They know everything, so who are you to tell them what to do?

Knowledge is not our enemy. It is our friend. But when we let knowledge limit us and obscure other possibilities, it becomes a very bad problem.

It is not a hard thing to admit you don't know everything about something. It is not difficult. I wonder what we are always trying to prove. There is nothing to prove!

If you don't know something, admit it and open your mind to learn it. Nobody will kill you. It is far better than claiming to know it, then messing yourself up.

Very knowledgeable people seldom claim to even know. They keep quiet, consider variety of options and they deliver results. Their results speak for them. They don't try to claim to be what they're not. They don't even make noise.

It is usually the people who don't know Jack that will always want to prove themselves. They want to show you that they know it because deep down, they are feeling insecure.

This could reduce a lot of problems in our world today arising out of useless pride and sheer stubbornness. It could greatly improve our lives and the way we see things.

We would then get to understand that nobody knows it all and we can learn from just about anybody. We are all part of a music. We are not the music. We just play our part and allow others play theirs without wanting to play everything ourselves all in the name of knowing it.

Nobody actually knows it all. We are all learners in this school called earth.