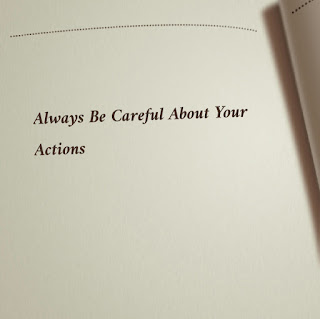 Although we would like to always forget about the past and focus on the present, we must also be cognizant of the fact that the past can sometimes rear its ugly head up.

Last Friday, a tape made in 2005 was released which showed the current Republican presidential nominee making some lewd comments about women.

That was 11 years ago. Most people would have easily forgotten about that. But you see, it
shows up at a critical period in this year's US presidential election.

Apologies have been made and some Trump supporters have been reassured. But some others were offended by the tape and they have even withdrawn their support for the presidential candidate.

In this world, every action and every step we take is important. It's easy for you to forget the past, but it may not necessarily be easy for other people to forget it.

It looks good to forget your past mistakes, but it's much better to minimize these mistakes to the barest minimum. And that's why it's important you think deeply before you take any actions.

These questions are important for us to ask. We often make the mistake of sacrificing long term rewards for short term ones.

That's because most of us are believing that "life is too short" We want everything hurriedly and we want to do as we like because we feel there is no time.

But you see, when your wrong actions get you into trouble, that's when life becomes really short because you'll spend time finding a way out of it.

Spending quality time to think about our actions before we make them may actually seem like wasting time, but that little time "wasted" saves you a lot in future.

Don't rush to do anything. Don't ever take any decision when you're too excited, tipsy or in a hurry. Take out that little precious time and think so that you'll save yourself a lot of time in future.

Most people on social media are busy behaving as they like. They show sensitive parts of their bodies and they almost go naked all in the name of getting likes.

They don't care about the consequences of their actions. As long as they're getting likes, all is well.
They forget that the past sometimes rears its ugly head up.

Some talk anyhow on public forums. I don't know what some people feel like when they are online. They say all manner of rubbish and they comment without shame.

They feel they are untraceable and nobody can ever get to them. I laugh.. because everything online can actually be traced if desired.