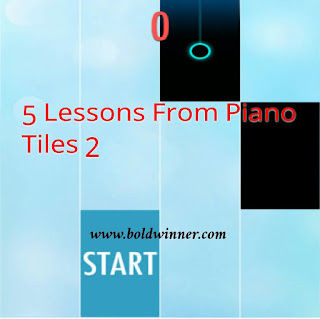 I recently downloaded the piano tiles game a month ago after I noticed it was quite popular among my peers. I wanted to find out what made the game enticing to play. So I downloaded and started playing it.

It was a simple and lovely game. To play, you just have to keep the music playing by pressing the moving tiles across your screen as they roll past.

What made me love the game was the different classical music tunes contained in it. And the songs really brought back some good childhood memories.

I was instantly hooked. And I played that game for hours at a go. To make matters worse, it
could be connected to Facebook so you can play and see the ranking of your friends who also play the game.

In a few days of play, I became #1 on my list. And I experienced and learnt a whole lot of things from playing this game some of which are shared follows:

#1 You Always Get Better With Practice
This theory has proven to be true at all times. Indeed practice is the only thing that makes you perfect. When I started playing this game, some songs were difficult for me to play especially those ones with double tiles falling simultaneously in chain form.

The moving tiles which now look slow to me were looking faster then. With continuous play, it became easier to master the double tiles pattern and match very fast tile speeds. In anything you do, practice, practice and keep practicing it. That's the only thing that makes you better.

#2 With More Practice, You Discover Your Own Unique Skills
I was surprised at myself when I kept playing this game. I was sometimes scared a little bit. I never knew my hands could move that fast and often times it appeared as if my mind took over.

I wasn't controlling my hands anymore, but it was moving and moving real fast. In the movement, I discovered some unique skills for the game which enabled me move my hands even faster. When you practice often, you'll discover the best pattern and skill used in doing anything.

#3 Focus Only On The Mission/Competition Before You
The first time I checked my ranking when I connected the game to my Facebook, I was the last person on the list and I saw the ones at the top, middle and below.
The positions were determined by the number of crowns you get as you complete your tiles. You start getting crowns when you've gotten 3 stars first.

#4 Once You Beat The Average, It Becomes Easier
It was easy to work my way up from the bottom of the rank list to the average. At the bottom of that list, just like in life, many people give up easily. Some quit too early, others abandon the game totally.

At this point, only your love for the game drives you.
And that's why it's important you do what you love. Because that's what will keep you from quitting when you feel like it.

As I rose to the center, I saw that there was a wide margin between my score and the person above me who was closer to the top. It was so wide, I wanted to quit, but I decided not to. I gradually played a couple more games and before I knew it, I beat that score.

Now I officially joined the top guys and guess what, it was easier at the top. The margins between the top scores were little unlike when I was at the average. I feel it was caused by two things: At the top, it's harder to get more crowns and when you're at the top, there is a tendency to relax.

Most of them were relaxing and that gave me time to overtake them all. One tried to stop me, bit twas too late.

#5 The View is so much better at the top
Yeah! When, I finally worked my way to the top, it really felt good being up there. There was no one else above me and I could see the score of every other person below me.
There was no more competition. I was now only challenging myself to beat my own records.

Of course, I relaxed and focused on other things. Bit occasionally, I checked the list to see who's trying to climb up to me and then top up my score.
It's really fun at the top, both in the game and in real life. You get to see things from a very wide perspective.

That's it. My experience and lessons from Piano Tiles.
Till next time,
Nigel.