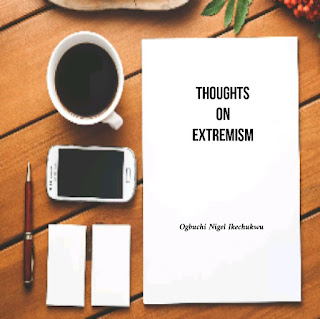 I was inspired to write this article because I realised that some persons are beginning to associate extremism with a particular religion or a particular group of people. Stereotypes have been created to fit certain innocent persons who belong to a particular tribe or religion as extremists. This is doing more harm than good in today's world.

An extremist is one who has zero tolerance for the views and perspectives of other people asides his own beliefs. He's ready to defend it it any way and finds it difficult to agree with anybody who thinks otherwise. Extremists usually believe that no other opinion apart from theirs is valid. This makes things very difficult for progressives who try to see things from different angles.

I do not think any religion or race has monopoly over extremism. Anyone who fits into the aforementioned description above is an extremist. It is wrong therefore to brand all adherents of a particular religion or group as extremists or terrorists because of the actions of a few.

If we are to subscribe to that form of thinking, we all would then be rightfully called extremists because of the actions of few people who claim to share our beliefs or culture. Just like calling everyone in a particular community rapists because one man in the community committed rape.

Any one can actually be an extremist. It is not exclusive to a set of people. And extremists are keeping us from evolving as a species. If you're always hell bent on your own beliefs and perceptions about any issue and you don't ever consider the perceptions of other people, you are an extremist! It doesn't matter your race or religion.

If you're in a relationship and you always claim to be right while your partner is always the one to blame, you're an extremist.

Rather than label people we don't even know as extremists, let us rather try in our own way to genuinely get to know those people. Some of them are not extremists as we may believe. Some of them may be progressive individuals, but are battling with the stereotype we've branded them. They may be trying to prove that they are different, but we don't even care to listen and understand them.

Extremists exist almost everywhere.. It is not exclusive. Let's all understand that, try to accommodate and get to know other people instead of stereotyping them on the outside because they belong to a particular faith.