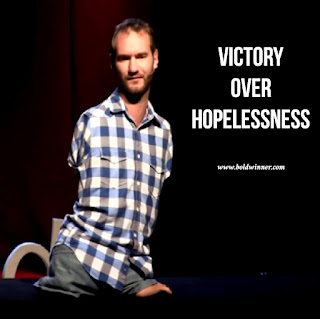 "Every single human being has value and my value is not determined on how I look, what job I have or where I'm from, where I was born, how much money.. All that stuff, they're nothing." - Nick Vujicic


Many people around the world today are hopeless, they're tired of this life and they don't know why they are here or what they are living for. Some of them have thought of committing suicide, while others seek to find this hope in the very wrong places.

I recently listened to a Ted Talk "Overcoming Hopelessness" by Nick Vujicic. He has no arms and no limbs, but he never lost hope. Faith in himself and an understanding of his power of choice helped him to rise above every challenge he passed through in his life.

Life must've have been very tough for this guy and really I cannot imagine what he has overcome in his life before getting where he is right now. Growing up, he must have been bullied and insulted for the way he looked without arms and legs. He may have been victimized by his peers. They may have kept of saying damaging and discouraging words to him.

But he kept on. He never let those negative words get to him. He chose to believe in himself and his ability to make a difference even in the midst of his handicap. He chose to still make something meaningful out of his life despite everything.

He didn't choose to try to fit in or go against his principles because he wanted to fit it. A lot of people do this. They go into all sorts of things just so they can feel loved by someone else or have external approval. Illicit sex, drugs and other vices appear to be something that those who have lost hope seem to cling on so they can feel loved and have some hope. But these things are empty as Nick pointed out. They do not fill that void.

The only thing that fills void is knowing who you are, having a purpose for living and defining yourself exclusively beyond what any other person thinks about you.

They may say you are ugly, not tall enough, not beautiful or slim enough, you should say to them and more importantly to yourself that you are beautiful the way you are.

They may say you are not wealthy enough or as rich as they may be. They may say you can never be as smart as they think they are or as attractive as they are. These things don't matter. You say to yourself that you can be as wealthy as you want to be if you set your mind to it and keep trying.

Nick let's us understand in his speech that love and hope are needed by everyone. Everyone is actively seeking to find hope and love, but most people seek for it in the wrong places. Faith in who you are and in what you want to achieve and always reminding yourself of your own definition of yourself, will keep you going from the inside.

Know yourself and be your own motivator. Be the definer of who you are. Other people can encourage you or motivate you. But understand that external encouragement may not always be available. It is subject to change, so never depend on it. Depend on your internal motivation.. strongly built on concise definition of yourself according to your own terms and knowing your purpose and your self.

Today Nick is a renowned motivational speaker. He has spoken at World Economic Forum and travelled to different countries to make inspiring speeches. He's married and he has written bestselling books. His life has already inspired millions of people around the world. Nick has made his mark at least.

If Nick had given up hope, or tried to gain hope by becoming a tool controlled by other people's words. He wouldn't be where he is today. Take a clue from Nick's life. You are never hopeless. You have value beyond what anyone else thinks. Find that value and focus on your mission. You will make your mark too.