The Best Way To Command Attention 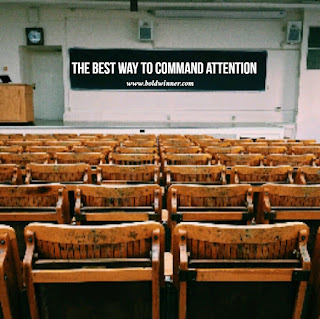 A lecturer once came into a class to teach, he started dictating notes for the students and at some point, the class started getting noisy. "Keep Quiet," He yelled and continued dictating his notes. The class became very boring and in a very short time, students became noisy and uninterested again. Some of them started fiddling with their phones and stuff. The lecturer got angry and left the class.

Another lecturer came into the same class and started to teach. He had no notes and he made every student feel at ease with his jokes. He never told them to keep quiet, the students naturally had to keep quiet because they found him interesting. It was easy to learn from his simple manner of teaching coupled with some cool jokes once in a while. The class was quiet most of the time as the lecturer effortlessly commanded their attention.

A man walks into a social gathering and starts expecting everyone to pay attention to him, he has got nothing interesting to say and he sounded like a bore. People naturally didn't care to listen. Another man walks into the same gathering and starts playing a guitar. He plays it so wonderfully well that the audience had no choice but to surround him and admire his dexterity.

A guy has been trying to get the attention of a particular girl without success. He tries many times and fails. It's not like there is anything wrong with the guy, the girl just doesn't find him interesting enough to grab her undivided attention. The guy can't just force the girl's attention, he has to make himself interesting to her in other ways.

Some people try to get the attention of other people by force. They think it's a do or die affair. They demand to be given attention when they are not saying or creating anything that demands it. You only get attention when you are able to do or create what people need. Then you will have their undivided attention without even asking.

Attention need not be asked for. Work on yourself and try to be very good in what you do. The attention will naturally come on its own. Ask yourself the question: Would you prefer to give your attention to a bore or would you give it to someone who is doing or saying something interesting?