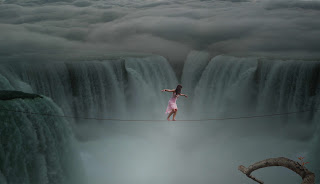 Many of us would rather settle for the easier way of doing things instead of taking the route that looks difficult at first glance because we hate discomfort. We go for what looks less stressful and never consider to try discomfort.

This attitude is quite understandable because when you think about it, you'll see that most people don't like anything that will "stress" them. Everybody wants it to be easy. But when you look at it deeply, you'll see that it is those people who are willing to take the road less traveled by the majority that eventually find life easier.

Many people prefer to always take the easy way. Instead of moving away from home and try to start living on your own to pursue your endeavors, many matured people these days will rather cling onto the safety of their parents. It's easier for them. There is free accommodation, free money and free food, so what's the point of trying to get things for themselves? They remain there wasting their years.

But there are those who have opportunities to live in so much comfort, but rather chose to take the bold step and be independent. They don't cut off from home as they still visit occasionally. And they earn the respect of their parents as a result of their choice to leave home into discomfort and pursue their dreams. These ones usually end up successful.

For some people, it's much easier to sneak in a textbook into the examination hall so they can cheat,  rather than study to pass their exams. It looks much easier to do that. And it looks harder to read and understand.

But later, these guys come out of school with great results but nothing to show for it! They can't get jobs because at tests and interviews, their performance doesn't show that they deserved the results they presented. And then, they blame the government for no jobs.

The ones who were willing to study and develop the necessary skills are those who finally get great jobs because they prove themselves worthy and then life suddenly looks easier to them because they have worked hard in discomfort for it.

Some people lack social skills. They don't know how to meet new persons, talk to a member of the opposite sex or just feel free around people. They may go about saying that it's just the way they are and therefore remain the same because they feel comfortable that way.

But some other person who may lack these social skills may decide to move into discomfort and take the initiative to try these things. (It will feel awkward at first. Entering into discomfort comes with awkward feelings and some fears. But as you keep on trying, you will master these feelings.) This person stands a better chance of becoming better than he was because he stepped into discomfort.

Many of the great inventors, scientists and politicians that we knew all stepped into discomfort. Most inventors and scientists spent a better part of their lives researching, experimenting and trying to discover things that have changed this world for good in their name. Some politicians have been jailed for years and attempts made on their lives because of a good cause they have been fighting for. Yet, they didn't run away from discomfort.

These men and women could've chosen to forget about these endeavors and just be comfortable and average. Why not keep partying, drinking and having some random sex instead of bother about achieving anything? It definitely looks easier to do.

But these men cared less about just entertainment. They moved into discomfort because their hearts were really burning to achieve something. Today, they are well known and respected. They speak and others keep quiet. They can enjoy their lives as much as they want because they earned it through their achievements. And what can be said about those who chose only comfort?

The big question now for you is this:

What does your heart burn for? What is your purpose or mission? How comfortable are you? How willing are you to delve into discomfort?

Winners are associated with some discomfort which they either created or which were brought upon them by fate, but they embrace and transform them.

If you're getting too comfortable anywhere or in any situation, just know that there is a problem. Moving into discomfort at some points in your life is what leads to your skyrocketing progress.