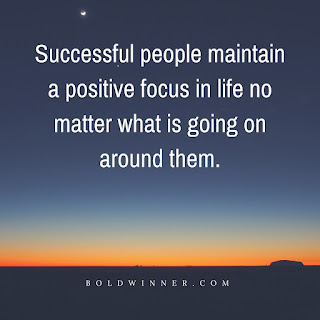 In a world of so many distractions, two attributes that can keep you on track are your focus and determination. Without these two, you will waste your energies trying to do many things without achieving any.

When you have a good measure of focus and determination to achieve a particular objective in your life, you hardly fail.

There's the story of two farmers: a wise farmer and a foolish farmer. They were both raising chickens for sale on different farms. On the same day day, it happened that 4 of their chickens escaped(for the both of them).

The foolish farmer was trying to catch all four at the same time.. He pursued one in a particular direction and immediately he saw another running chicken, he left the one he was pursuing and chased after that one. He continued chasing after them randomly and changing targets. Before he knew it, it was nightfall and he caught none of the chickens.

The wise farmer focused on catching one chicken at a time. He pursued one chicken, followed it in every direction and even when he saw other missing chickens aside, he continued with the one he was pursuing. And he caught it. Tied it to somewhere close and went in pursuit of the next. Before nightfall he was able to recover 3 out of the missing 4.

This story is commonly told by the elders in our community to the younger ones to teach them the value of focusing and staying determined. It is the key to achievement.

These attributes of success have always remained the same for winners, but very few people are willing to live by it and that's why there are few people who are really winning. When you look around you today, many people are so distracted. They pursue one thing today and the next minute, they chase after something else.

With use of the internet becoming increasingly popular in our society today, the problem many people are facing is staying focused and determined in using the internet. One minute, they are researching about something, the next minute, they end up clicking something else totally unrelated.

It takes a lot of discipline today as few people are willing to put in the time, determination, effort, obsession, dedication and focus needed to live the life of their dreams. Very few people care to think deeply, plan, stay focused and utilize their God-given intelligence to solve their problems.

What is the thing that separates the bold winner from the loser? It is the ability to have that patience in putting in the required time, determination and focus required to achieve exactly what they want.

And how do they do it? They "think"...they think very quickly or slowly about the situation as required and make the best decisions before acting.

They don't rush to act... Thinking is about 85% of the work...because winners understand that if they get the plans right with effective thought processes, the action becomes easy.

Let this blog post be a reminder to you to stay focused and determined in whatever objectives you have decided to achieve. That's the key to achieving it.
Motivation success