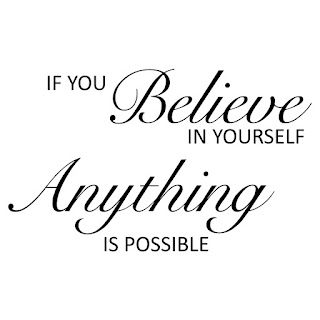 No one else has the ultimate power to change your life but you! In the past I used to think that the outcome of my life was dependent on the circumstances and conditions surrounding me. I used to think I was limited by my skin color, looks, country, tribe, nationality or belief system. As a result, I didn't believe in myself.

It was when I discovered the power of believing in oneself and one's ability to make it through any challenge that I began to see things change in my life. I believe in God and I can't confuse my belief in God with belief in myself. It's important to note that they are two different things.

In short, if you really believe in God, you will also believe in yourself and you won't believe in failure. When I talk about believing in yourself, I am referring to being self confident and highly motivated to pull through whatever challenge that comes your way.

It should be part and parcel of every genuine believer in Almighty God. God never fails, so you should be confident in yourself and your endeavors that you cannot fail because your father cannot fail.

When people claim to believe in God and yet they don't even believe that they have what it takes to pull through difficult times, it means they don't really understand what they claim to believe. Belief is not just lip service. It is a deep seated consciousness that must permeate every aspect of your life.

There are millions of people out there willing to tell you that you can't and give you millions of reasons why you should give up your "crazy" idea and quit, why should you add to that number by also telling yourself that you can't? No! You know what you believe in.. And that should spur you to continue believing in your ability to succeed even when many people are predicting your failure.

Have you looked at the lives of people who are always saying negative things about your ideas? Take a look at their lives, they're all the same. Nothing spectacular or noteworthy about them because these people only speak and BELIEVE in negativity! They believe the can't and so it becomes their reality!

Henry Ford said and I quote, "Whether you think you can or you can't, you're RIGHT!"

A winner believes in his God, himself and in his ability to accomplish a mission, no matter what the world tells him.

He is undeterred like a formidable lion and his determination scares the hell outta any obstacle standing along his path...  Be a bold winner today and take control of your life.