The Active Ones Take It All 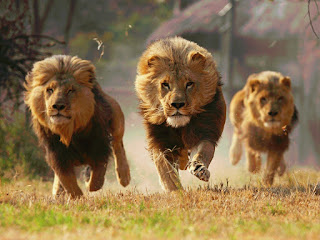 Hey, you! Yes.. you! Are you still delaying that wonderful idea you may have been nursing for a while now? Have you been hesitating on starting that business, journey, career, course, or work you have  to do?

Have you identified a favorable opportunity, but you've not been able to utilize it because you're thinking too much about it? Then this article is for you. I want you to bear this at the back of your mind: "The active ones take it all."

Life offers everything to the ones who are active. Life doesn't care about your intention or what you're thinking of doing. It cares about what you're doing!

Let's say there are two people who intend to start a similar business, let's say it's a small restaurant. One of them has been nursing the idea for a long time and is very passionate about it. He keeps thinking and thinking of how to start up the business and get everything ready but has done nothing yet.

The other one also nurses the idea though he is not as passionate as the first, but he immediately starts cooking in very small quantities and sells to his neighbors and friends living close.

He is not thinking too much about how to buy a big land and build a big restaurant like the first may be thinking. He just starts cooking with what he has at that point and starts selling to those he knew.

Which of these two men do you think has a higher chance of making a boom in the business? Of course it's the second. With his strategy, he will slowly build a loyal customer base while generating some money in the process.

As his business grows, he will be able to acquire more materials and facilities needed. He may even hire extra hands. And before you know it, a profitable restaurant is born. The first man will still be there thinking of how to get everything set.

Even if he finally gets it set, the second person have made much progress already with the time he had lost. He will have to start from scratch to find loyal customers and advertise his business. If second man has played his game right, it will be difficult for this man to even catch up.

And what gave the second the advantage? Activity!

Dormancy is a trap. Even if you're thinking and making plans, don't let it entrap you into being dormant. Because dormancy of any form is dangerous. Much time is lost and before you know it, active men have taken the opportunity.

I give you another instance, let's say two guys are really in love with a girl. The first one may really be genuinely in love with the girl and really desires to make her his wife. But he isn't active. He doesn't make efforts to let the girl know how he feels about her.

He's just having these feelings and he's not active about expressing it. What do you think will happen? The girl will be there because there's no way she's going to know what he has in his mind. And she may never get to know how much love this guy has for her simply because the guy wasn't active.

Another guy may come around, he may not really love the girl that much, but he is an active man, he talks to the girl, shows care to her, takes her out on dates and courts her like a lady.. Of course, the girl is likely to fall for him because at least he was active enough to express his feelings.

Put yourself in her shoes and ask yourself who you would go for given the choices? The answer is too obvious. How can she even go for a man who hasn't shown any signs that he loves her?

Again, let's say there are two politicians who aspire for a political position, one of them is active. He always moves around different communities, interacting with the inhabitants and gives them convincing speeches.

The other one does nothing but hope and pray that the people see the goodness inside of him to vote him on election day.

Activity.. There's nothing like it. If an upcoming musician comes out today and sings his very first song, do you think he stands a great chance of becoming more popular than any of the top musicians in the world by virtue of that song?

Of course not! He will have to be active well enough to perfect his art and compete with the masters. Activity is what will sharpen his ability and bring him to the limelight.

Activity.. How active are you? If there is anything you desire in your life that you don't have, it's because you've not been active well enough to have it.

Activity always pays the active ones. It never owes. It pays right on time. With activity, you will get everything you want and even more. Just learn to be very active in the pursuit of whatever you desire.

There's really no other way if you look at it deeply. You only look for other ways because you don't want to be active. You feel like it's stressful. And you desire to go back to your free and lazy patterns.

There's no successful man who wasn't active. Look around you. Study the successful and you'll see that they are very much active in their lives.

It's very few people that are willing to go that extra mile just like the active ones.. And that why majority of people are average and are living in obscurity, while those very few control everything.

They get to control everything because they paid the price that billions of people couldn't pay. The gains are worth the sacrifice isn't it?

There's no point giving more examples because there are many examples that we see in our everyday lives telling us that only the active ones get everything they want, but some of us don't pay attention.

Therefore, I am challenging you today to dare to be active. You're reading this blog post because you care about success, because you're different from the rest and you want to stand out from them.

You are already success oriented and that's why I'm reminding or challenging you to keep being active. Be relentless in the pursuit of whatever it is that your heart really yearns for.

You don't have to listen to what they're saying. You know exactly where you are meant to be and you're not setting for an average life like them, so you should focus on your activity.

Activity will always reward you and set you apart.

Life is all about activity and whatever that is inactive is considered dead.

Pursue excellence with activity and success will chase you pants down!

Be active and keep winning!