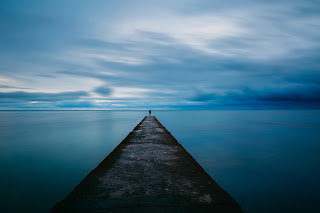 We live in a world where many people are too afraid to go alone sometimes. They always want to please the majority, they always to be with the majority and they are afraid to go their own path when they really have to. This has kept many of them from being successful.

How willing are you to go alone at some point in your life? How badly do you really want to stand out or leave your mark on the world?

Are you willing to sacrifice your highest aspirations just so you can go along with other people always? These are really important questions to ask yourself.

There are some people who have awesome dreams and visions of exactly what they want to do with their lives. You see their eyes glitter with excitement anytime they talk about it, but when you ask them why they aren't pursuing it yet, you may hear stuff like: "My parents don't want me to do it," "People say I won't make money from it," or even "It's not so popular."

There are many more answers like that from people who may have been blessed with wonderful gifts and ideas. Yet, they don't let those gifts blossom because they're afraid that the path isn't popular.

Now there's something you have to know: your parents or any other close person you have in your life is only there to guide you. Their role is limited to guidance and not making decisions for you.

The only one who is qualified enough to take decisions for you as long as you know the difference between right and wrong is YOURSELF.

You are so unique and you are not like anyone else. You are the only version of you in this world. And out of over 7 billion people on this planet, no one else thinks the same way as you do. And no one will ever do so till eternity. If you understand this, you should know that your strongest feelings and inclinations should not be toyed with for any reason.

If you were naturally born with certain gifts, let's say you can draw very well or you can sing, or you're good in setting things apart and building them up, whatever it is, learn to nurture it. Whatever natural talents you have, you should nurture and grow it.

A lot of times, I hear people complain that they want to do something else asides what they are naturally good in because others say there's no money in it.

It's not always about the money. That's the mistake many people make. They sacrifice their ultimate fulfillment and happiness on the alter of money. They could've been superstars, they could have been famous and extremely wealthy if they followed their talents and perfected it irrespective of what people said, but they drop it and start pursuing money.

Money will come naturally to you as long as you're passionately doing something that has the capacity to add some value to people's lives. It will definitely come. Keep this at the back of your mind. However, it is not the goal!

It's when you make money the goal that you become frustrated and unhappy when you seem not to be getting enough of it.

The real goal is to develop yourself and your capacities to the highest possible extent. You do this so selflessly and passionately that whatever you are doing becomes second nature. You become lost in your art, that's when it becomes magical and you see the kind of respect your art will command.

So when you are afraid of going that path that looks lonely because people have said there's no money in it, you will end up following those people to pursue the same things they pursue and you may never reach your highest potential.

You may have been discouraged and deceived into following the crowd because you heard  that what you want to do isn't so popular. The question you should ask yourself is: Who made all the popular paths popular? They are people like you and me who went their own paths just as they were inspired from the inside.

You may be the one destined to make that path popular in your environment. A new and lonely path might just hold the potential to set you apart and set you on a road to financial freedom. But you think "It's not popular. How many people want to do it?" And the reasoning becomes.. "Since other people aren't doing it or thinking about it, then it's not good." Right?

Let me let you in on a secret: You'll hardly find anything in a place where people are crowded. Even if you stand a chance to find something, you'll have to fight off fierce competition. There are people that are already there before you and more people are rush into it. It becomes difficult.

But when you're able to see potential in a field where very few people are playing, you stand a very high chance in becoming very successful if you go that path. In other words, less is more.

If you're always following the crowd, you will miss many things. I don't mean that you should always try to stand out and be on your own.

Sometimes, you have to go with the crowd, sometimes the crowd is right. But what I'm saying is that even though you blend in with the crowd when it's necessary, you must never be afraid to go alone when it's also necessary.

When it comes to success, you have to be extremely ready to go alone. Many people don't want to be as successful as you want to be. Some people just want to live average lives; get educated, get a job, get married, have kids and die. But I guess you want something more than that.

And if you really want it badly, you have to understand that you will do things that many average people won't do. Of course, when you are doing those things many people won't be with you, because many people don't share the same vision. Only very few like minded people (if any) will stick with you on that path. So you should be definitely willing to go alone.

There's no looking back. There's no expecting loved ones or family to support you or hold your hands as you're going. If they're ready to support this burning desire in you, then it's fine, or else you go alone!

Don't say because people aren't there to support you or encourage you, you won't go ahead with it. If you do so, you will be the one who lost.

You'll find out that when you are convinced to go alone even without support and you finally become very successful in that thing, those same people who never supported your idea will be forced to celebrate with you. Your parents who may have disagreed with your idea will commend you for going your own way.

Your friends who were skeptical about your idea will tell your story and the people who discouraged you will sing your own praise. At this point, there won't be any need to harbor hatred for them in your heart.

You'll forgive them very easily because the joy, contentment and fulfilment you've found from going your own way will be too large to even accommodate any hate.

Be willing to go alone if need be and keep on winning! Let walk together on the path to success!