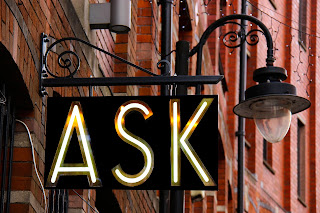 Many of us don't realize how golden our questions could be. We sometimes fail to see that asking a question could be the only thing keeping us from moving to point A from point B. We tend to be shy to ask questions because we fear that other people may see us as incompetent.

There was this young man who joined us recently at the place where I currently work. He just finished off from a well known technical school around the area and he was lucky enough to land a job with the firm.

He was so all about his knowledge and expertise in the field and kept on looking for opportunities to explain things to any of the staff members who cared to listen.

Well, we all admired the young chap and we almost believed he was as competent as he claimed. Then came his first job role; it was the most basic. He was assigned to balance weights on a car tyre to ensure that the weights were evenly distributed and the tyres won't wear off unevenly.

This guy immediately set to work instead of asking any of the staff how the machine was run. He simply believed he knew it all. As he was trying to set up the vehicle's tyre, he made a big mistake and he didn't lock in the tyre accurately..

An assistant tried to interrupt him and show him the correct way of locking it in. However, the "all knowing" dude refused to listen, so the assistant left him to continue.

I was at a corner observing him alongside other senior members of the staff. We gave ourselves knowing looks and laughed at the boy's attitude.

But the guy kept on saying that he knows what he was doing, that he had studied it in school and that we should come and check his phone to see that his procedure is online and indeed "very correct!"

No one argued with the boy. We just watched him as we already knew the outcome of his wrong setups. As expected, the automobile tyres kept giving him wrong values and he almost injured himself trying to still balance the simple tyre with more weights than even necessary. We all almost burst out into laughter at his frustration.

After he tried his best and came to accept his inability to do the task, our most senior staff had to come in. He reset the wrong arrangements of the new guy and followed the correct procedures.

What the chap couldn't do in 30 minutes, he accomplished in 2minutes. Then after he finished, he looked at the boy and only said four words: "Learn to ask questions." I think the boy learnt his lesson that day.

I shared this experience just to emphasize the importance of asking questions.

Asking questions doesn't necessarily mean you don't know (even if it does, so what?). Asking questions mean you're ready to learn new things. It means you're willing to know the best ways of doing any stuff.

Every time you pretend like you know something because you want to avoid asking a question, you run two risks:

The first one is that you may never get another better opportunity of knowing that thing.

The second is that you run the risk of embarrassment or painful mistakes when the time will come for you to do it and you can't.

If you don't want to make same mistakes over and over, please ask questions.

A philosopher once said:

Our people say that: "Onye ajuju anaghi efu uzo" which is translated as "The one who is fond of asking questions cannot miss his way."

It's as simple as that.

Most of us who have gone to good schools and are well read are fond of making the mistake of not asking enough questions.

You may feel that by virtue of your education, you know much more than other people who may not have been so privileged to get the same education.

Then you underrate them and you refuse to ask them questions when some of them may have the keys to something you seek.

That's what's keeping many people from excelling in life. There's something you can learn from anyone. No one knows it all, no matter how well read.

Build networks with people of like minds, but never despise what you can learn from those who may look less privileged.

Don't be afraid to ask anyone questions when your mind pricks you about something.

Your success isn't far away if you learn to always ask clarifying questions. And when you get good answers, be grateful.

Bear this in mind and keep winning!
Motivation