The Easiest Way To Rise Above Mediocrity 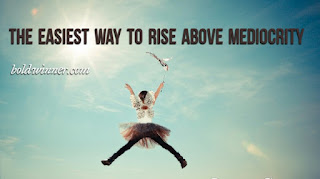 Let's roll. Catchy title right? You probably were quick to click on this link because you really wanted to find the easiest way to rise above mediocrity. That's a good thing and that's exactly what you're going to get.

A lot of people are striving for success in their personal lives because they want to live life comfortably, stand out and not just live an average life like everyone else. This is really a good thing and the hunger to rise beyond the rest is the starting point. However, even though many people want to be successful and are striving for it, there are few people who eventually encounter success.

Why is this so? More and more people are working harder everyday doing work from dawn till dusk, trying to make ends meet but still they find themselves trapped living life at same level with other people. Some people have read many self-help books, amassed lots of certificates, gone to the best schools, tried their hands at businesses and even listened to the best advice on success but yet they can't still rise above mediocrity.

Mediocrity becomes a sort of a big wide gulf that is very accommodating and stands in between them and their success. Let's bring it down to you, my dear reader. Maybe you have tried your hands at stuff and failed. Maybe you've applied for lots of jobs, but you've gotten none yet. Maybe you have a work or a business that you're doing, but you're not really happy with it because you can barely pay your bills with it. Maybe, just maybe.

What have you done about it? You've read books, you've gone for seminars, you've done your research and you're trying your best. What's wrong? Why are you still trapped with the majority of people instead of breaking out? The next lines you'll be reading will tell you exactly what's been keeping you from achieving success and what you need to do. Read them carefully, digest it word by word, don't rush and try to understand, then apply it.

The only reason you've not risen above mediocrity is simply because you're not doing more than the rest in your best niche.

Yeah, you read that right. There are two important things there: "doing more" and "your best niche." You could be working so hard, but you may not be doing more than the rest. Working hard isn't the same as doing more. A person who does more doesn't just work hard, he goes the extra mile to accomplish much more than other people.

A person who does more is not an ordinary person who wastes his or her time. He makes it a business to be very smart and thoughtful about whatever he chooses to do. Working hard isn't bad advice, as a matter fact it's important to work hard, however the question is how smartly are you working hard?

There's a story, two men were given 10 minutes to cut down one tree each of the same size with two very blunt axes. They were not in the same place. So they had no idea what the other person would be doing. As the set time began counting, the first man immediately rushed into action, hitting the tree with the blunt axe. For 10 minutes he tried to cut down the tree without progress.

He was working very hard. Hitting the tree with all his energy. But he wasn't making any progress. In the end he didn't achieve any success. He was sweating profusely, exhausted and panting. This is where so many mediocre people are. They work so hard, and they invest so much energy into achieving more, but they get little. This first man was working hard, but he was doing little. He couldn't cut down a single tree.

When the time started for the second man, he gave it a bit of thought(important) and decided to sharpen his axe first. It took him 3 minutes to sharpen the axe and it was very sharp. And he hit the three "One, Two, Three, Four..." At the seventh hit, the tree fell down thunderously. He accomplished this in 2 minutes. He had 5 extra minutes to spare! This is worth thinking over for sometime.

The first man could've hit the tree 100 times in quick succession with aggressiveness. This man cut down the tree in 7 hits. It was easier for him to achieve success. Given the extra 5 minutes, he could cut down three more trees. If he desired to work as hard as the first man, 100 hits should cut down about 14 trees coupled with his "doing more" through being smart. The first man cut zero.

I hope you already get the drift about doing more than the rest. It's not about just repeating the same thing over and over without thoughtfulness or doing it the same way everyone does it. You must have the mindset and consciousness of doing things differently with "sense."

This is where passion for what you do plays a great role. That's because you are motivated to do more when you're in a field you're passionate about. We were not created to do the same things. Everyone has a role and mission to accomplish. It doesn't have to be what another person does. Many people are trapped in mediocrity because they are merely copy cats and they're never original.

That's why they're easily fed up. They finally go into coding, medicine, engineering, acting or whatever and then it starts becoming a chore for them. They get easily bored and they don't have any passion for their work because in the first place they got it all wrong. Very passionate people are only found in their niche and their passion keeps them doing more than the rest.

That's why all those successful people who stand out are very passionate. You see it in their eyes. From the way it glitters, from their expressions, you simply know they're where they are meant to be. Everyday becomes play to them because they're in their best niche. Mark Zuckerberg, Bill Gates, Lionel Messi, Oprah Winfrey, Barack Obama are few examples. These guys aren't working anymore, they're playing.. Playing keeps them doing more than the rest because they're enjoying the play.

Do you ever feel tired of doing what you love? Let's say a video game, an interesting movie or being with someone you love? Of course not! That's how work feels like for passionate people in their best niche! This article could help you identify your niche. Discovering your best niche is a personal job which only you can do for yourself. No one else will.

Once again: The only reason you've not risen above mediocrity is simply because you're not doing more than the rest in your best niche.

In other words, the easiest way you can rise above mediocrity(the rest) is by doing more than the rest(explained) in the niche where you function best. It's just the truth there is to it.