Jealousy And Praise Are Pointers To Your Success Path 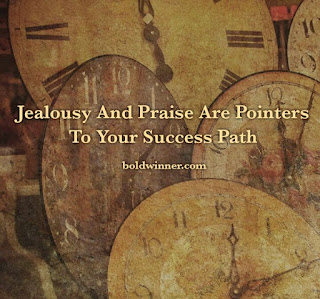 Jealousy and praise are two sides of the same coin. They are both emotions arising out of the same thing which is achievement. In a competitive world however, where many are trapped in mediocrity, it's easier for other people to get jealous about what you've achieved and you may tend to perceive their envy negatively instead of seeing it as a pointer to your path of success.

Take some time to reflect over your life and figure out the things that you're often praised about. Maybe it's your dexterity in fixing up technical stuff, maybe it's how good looking you are, maybe it's how sweet your food tastes, it could be how well you play a particular sport or even how well you speak, dance and perform on stage. Whatever it is, try to write them down.

Also think about the things that make other people envy you. Write them down too in a separate list. In many cases you will figure out lots of similarities in the two lists. But the point of this exercise is to bring to your consciousness the various things which can be harnessed to lead you to ultimate success. The list could be long or short. It doesn't matter, just be very honest about it and write anything as long as you can be praised or envied because of it.

It's important to make your decision on what you want your life to be based on those items on the list. They're the items that make you stand out of the average life. You should think creatively of those items, find out what it says about you and seek for ways you can add value to the world through it as a possible career path.

For example, say on the list, you have intelligence, maybe you always come on top of your class and of course feathers are ruffled. You have other guys who want to be like you, but you're not giving them any chance. You're busy winning the prize for the best student yearly. Of course, naturally your competitors and other students will tend to be jealous of you.

People tend to naturally feel jealous when they feel that someone else has something which they wish should have been theirs. Sometimes, even the best of your well wishers cannot help but feel a bit jealous of your accomplishments when you're moving up real fast. It's not like they want to be jealous, it comes naturally to them.

In such a school situation as described, the intelligent kid shouldn't make the mistake of channelling negative energy back to other students who may be envious of him. He would lose his focus if he does that and he will go on making unnecessary enemies for himself. But if he doesn't really let the envy of others bother him, he will stay on track as an intelligent kid and develop his intelligence very well.

With a sharpened intellect, he could go into any other field of endeavor he's really passionate about and excel.

For you maybe it's football, managing people, planning or organizing, cooking, dancing, acting, repairing, coding, arguing, manufacturing, talking, cracking jokes. Whatever you're praised or envied for, you should develop it. It points to various paths to your success. You could be praised for being good at games, it says you're a competitive person and you should focus on figuring out how to channel your competitive nature for creating good.

Some people are just very clean, or they have a keen sense of fashion. Some are just really good at Mathematics, some are good at writing or speaking very well, they've got an accent. All these are pointers to their success paths.

People must've made very good comments at you for the way you do something. There are things we do very well, even though we may not notice it ourselves, but other people could see it and say something about it or react in a certain way to you. See through this praise and identify your best skills and maximize them. Don't get carried away!

Alternatively, people must've gotten jealous over you based on something. You should be observant enough to figure out what's making them jealous because your strongest points to progress are usually envied as well. So.. Instead of getting worked up about who's envious or not.. See through the envy and know what you're doing very well. Then continue to do it and expand your experience and skill in that area. Those areas are your key areas to shine and as a bold winner, the goal is to keep shining and keep winning!

Till next time,
It's your boy, Nigel.