If You Ever Felt Like You Don't Know How To Go About Anything, Read This Article 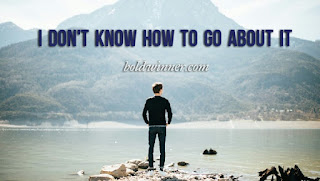 Many dreams have been trapped, caged and buried as a result of the popular line "I don't know how to go about it." It has limited a larger number of people from achieving success in their various fields. This article has been written to push you beyond this line to go ahead and take action based on whatever little information you currently have.

To begin with, I'll like to share this rarely acknowledged truth with you: no one knows exactly how they're gonna go about achieving anything big. Many successful people have simply stumbled upon opportunities because they were already in motion. Remember that "..already in motion!" Anyone who claims to know exactly how to be successful in achieving their ideas is most probably lying. People are in the dark.. but the few in motion will stumble upon their life changing opportunities.

Some of you tend to easily give up on achieving whatever wonderful ideas you've got simply because you think you don't know how to go about it. But the simple truth is that there's always a clue or a hint as regards something you can start in line with that idea.

The Wright brothers didn't have a clue as regards how they could invent the first successful manned flight. As a matter of fact, many people at that time thought it was impossible and even stupid to try something like that. These  boys didn't know how to go about it faced with so much pessimism, but they went ahead to experiment and take action that helped them figure out exactly how.

They could've sat back and said "We'll like to invent the first manned flight, but we don't know how to go about it." Their time would've just ticked away and they'll probably have died unknown without making much impact. Thanks to them, the aeronautical industry has improved rapidly since their 12 seconds successful flight in 1902.

What about Thomas Edison who was the inventor of the first electric light bulb? History has it that this dude tried over 1000 times before he was successful in his invention. One thousand good times? I wonder how many of us would have had such patience which Edison had.

Did he know exactly how to go about it? Of course not! If he did, he would not have tried more than the first time. He would've gotten it right the first time! But he had no idea, but was willing to try given some clues which he had. Are you still having the mindset of knowing exactly how to do anything? Let's go over a few more examples.

Abraham Lincoln was one of the foremost and most instrumental American presidents. Legend has it that he failed at many things in his life time. He even contested for many elective positions and failed. You think this man with all his challenging experiences knew exactly how he was gonna become the president of America? You must note however that he was willing to try.

What about Nelson Mandela who was instrumental in the fight against apartheid and multicultural discrimination in South Africa? Do you think he knew exactly how he would be instrumental in achieving his vision even after spending 27 good years in prison? That's a question I'll leave you to answer.

In a post here on Goalcast, Actress Taraji P. Henson shared her experience before she rose to stardom. She left for California at 26 years of age with only $700 in her pocket and her toddler. Some people thought she was crazy by taking that decision, but today, she's grateful she took that action.

There are many more examples that I could give, but I'll just stop at these few. What's the point of telling you about all these people? It's simply to let you know that you don't need to focus or dwell too much on figuring out exactly how you going to achieve anything. Because it's a big trap for the mind and you'll easily get stuck there without doing anything.

You should simply just find clues and take action. Action(being in motion) is really crucial. It's the only road that pushes you closer to whatever you want to achieve. The common thing among all these guys mentioned above is this: they were all willing to take important action and try out something(which may have looked impossible) in line with their vision. And that's why they were still able to achieve it.

They all acted on the little clues they had without trying to figure everything out first. Clues are everywhere.. Sometimes, they just come into your mind as hunches to act. Other times, you might get clues from discussion with other people. With the internet at our fingertips, there are billions of clues towards achieving anything. So clues that could inspire you into action are so free.

But you know why you've still not made much progress? It's because instead of acting on those clues, you allow your fears creep in and then you want to figure out the perfect(exact) way to achieve your vision. The whole point of this article is to let you know that there's no exact or perfect way which you can figure out. You're only wasting time.

Simply pick your clues and act on them. Try things out instead of being stuck on the idea zone. When I created this blog 2 years ago, I didn't know anything about blogging. I didn't know about formatting my posts to be search engine optimised, I didn't know about how to design my templates, buy a domain name, edit html and all that. I only had a clue back then and that was to create this blog on a free platform.  So I went ahead to create this blog with all my ignorance and in the process, I've learnt a lot about blogging which I never knew. I've met with other experienced bloggers and there's a whole lot more for me to learn.

What if I had been stuck by the question: "I don't know how to go about blogging?" I may probably have never created this blog. You may not have been reading this today. I may never have had the opportunity to touch people's life for good through this blog. It might have just been one of those ideas in my head which I never acted upon. But this blog is here and I'm able to reach you because I wasn't stuck in figuring out everything about blogging first.

So that's the deal: Whatever you're passionate about doing, whatever ideas you've got in your head, whatever way you want to add some value to the world, simply go into it. Take any available clue and act on it. When you're into it, you'll be surprised at how you will begin to know whatever you need to know. You'll learn a lot in the process and you'll move closer to achieving that big idea.

I want you to be successful and never be stuck in the same zone in your life. And I hope this article inspires you to break out of that comfort(idea) zone into activity.

Break out, take a clue, act on it and keep winning!