The First time I Tried To Speak In Public 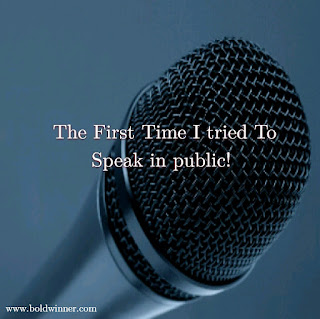 I opened my mouth to speak and I was shocked that the words won't come out. It was as if my tongue was tied. It felt very strange. My heart was beating very fast. Just in a flash I had surprisingly forgotten everything I had planned to say.

"Damn.. This is it," I thought. "The ground had better opened up to swallow me." I was sweating uncomfortably and I could see my own hands shaking with the microphone. I was done for! Luckily for me the guest speaker understood what was going on and just joked about the situation. Then he politely asked me to go back to my seat.

My oh my! I was embarrassed. Before I raised my hand and came on that stage, I was confident that I could do exactly what that speaker was doing. I had carefully rehearsed what I will say in my mind many times and I had envisioned the perfect speech. I had overlooked one thing: The fear that comes with the first time.

It turned out to be a disaster. That was a few years back at a youth gathering. I had never forgotten that experience. I decided to find out why. What was there to be afraid of? Why couldn't I simply say what I wanted to say perfectly? I like being the best in anything I do, so performing that way on stage was disturbing.

I went online, checked out articles on public speaking. I even asked some friends who were used to speaking up at such events. And I found out something from them: Most of them were also very nervous during their first speech. However they kept practising and they kept on speaking with every opportunity until they became used to it.

That was it. That was the answer I was seeking. Since then, I vowed to always utilise every opportunity I get to try to say something in public. And gradually I grew and I am still growing. I can't say I'm the best speaker in the world, but I can say that the initial fears I had have all disappeared.

I found myself not always bothering about what the audience thought. I became more relaxed. I said what I wanted to say with confidence and finished smoothly. I got better and better.

The first time is not usually rosy. And you don't need to be afraid of failing the first time. Some people are too shy to fail the first time that they don't try anything new in their lives and hence they do not get good at them.

I can remember the first time I tried to ask a girl out.. It's a story for another day, but the whole point of this article is that we should dare to do those admirable things we are afraid of. It doesn't matter if you fail at it. People laugh at you and so what? They still go back to their lives. They don't laugh forever.

Don't allow the fear of trying new things keep you from improving the quality of your life by learning new things. You have to be bold to face your fears and score your wins.

In short, make it a deal.. to try to do for the first many interesting things that you'd have loved to do. Go and visit that person. Try to play piano. Try to learn a new game. Go out with someone. Organise a fun party. The ideas are numerous. Think and try. That's all it takes and you'd see yourself becoming a generally better person.

See you at the top!