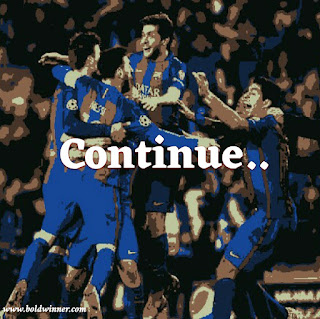 You've been in various relationships, but it seems that you've not found the one for you. "Continue.." You have a dream and a strong vision of what you want to achieve. You've been trying your best and making serious efforts towards the realization of that dream, but things don't seem to be working out right. "Just Continue!"

Sometimes, it may seem that things are not working out just the way we want it to work out. It may take more time and more trials than we were expecting. It might require more responsibilities and enhanced efforts. We must remember to continue.

Do not be discouraged that you are not getting results yet. As long as you're putting in your best and you are taking required action to the best of your knowledge, simply continue. You can only meet your success and your lucky break when you constantly show up in your activity.

If you let the present state of things or current results to discourage you from constantly trying, then you've automatically lost. Think about this: let's say that in a particular game, anyone who rolls out "six" on the dice wins the prize. You cannot win that game when you've decided not to play at all.

First step is coming out to play that game. You must participate to win. You have to be active by joining other players and rolling the dice. You may roll the dice 20 times and not get a six.. But it may just be a "six" on your next throw. If you give up, you give up totally on the possibility of rolling out a six and you can never win the prize.

But if you continue to play, despite not getting that "six" , by the law of probability, the six must show up for you once your persistence is there. If you're ready to continue and go all the way for what you want to achieve, you will definitely achieve it. Your fortune and your success will have no other option than to show up and bow to your determination.

It reminds me of this week's game between Barcelona and PSG. PSG was leading Barcelona with 4-0 after the first leg match. Everyone thought that there was no way Barcelona could turn the four goals deficit around in the second leg. But Barcelona's shocked everyone to turn around the score sheet with a 6-1 victory against PSG which led to an aggregate of 6-5 with Barcelona progressing towards the next stage.

They continued.. They didn't give up. They didn't think that the initial 4-0 defeat was impossible to turn around. They believed in themselves and in putting out their best efforts on the football pitch to turn their situation around. They "continued" and it paid off greatly.

Continue showing up, continue taking action and continue trying! One day the outcome of the dice will roll out in your favor and you will definitely celebrate it. Don't think about the outcome. No matter how unfavorable it seems. Just focus on showing up and actively participating in the game. Someday, it will be your turn.