Don't Be Problematic, Be Tolerant. 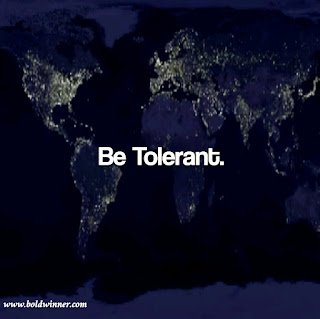 The most problematic set of people in this world are the ones who think they know things so well to extent that they make no room for additional knowledge. These people do not consider or tolerate the opinions and views of other individuals other than themselves.

They are ready to fight and humiliate anyone who has contrary views to what they believe or think they have known. The question is: "If everyone in this world was exactly like these intolerant ones, do you think we would still be existing as a species?"

Think about it. There would be intense fighting everyday, wars, murder, serious crimes and etcetera. The people who are tolerant enough to understand other people are those who have kept things in balance. They are the progressives who try to get people to unite themselves, understand themselves better and live in peace despite their differences.

Now some people claim to know God so well that any other contrary view from another person becomes a serious offence. But let me ask: Do you really know God Almighty, the Infinite and creator of all things visible and invisible or do you just believe that you know Him?

Do you really think you really understand the deep mysteries and operations of God? Do you actually know him or you just believe you do? Think about it. Because I don't think anyone can really claim to have known God and understand all his operations.

I think knowing God should mean a progressive knowledge of our maker which should never end. It should mean that everyday we are still learning about God and getting to know him better. Not claims to a complete and unshakable knowledge of him. No one can claim to have that.

I used the concept of knowing God as an example because religious intolerance has been a major issue. The fact that gaining knowledge is progressive means that we should not be quick to disregard other people's opinion. Indeed, some people may have opinions that may look wrong or actually be wrong, but before we write them off, let us listen to them and if they are actually wrong, make them understand from our perspective.

We must tolerate the opinions of other people and if we are in disagreement, we can argue in a healthy and tolerant manner. We must not fight over different opinions because knowledge and learning never ends.

Understanding one another should come first when we have different opinions. With understanding and an open mind ready to learn, you can learn new things from the opinions of others or you can help others really understand your point ONLY when you've understood theirs.

No matter how much we think we know about anything.. We must remind ourselves that we do not know everything and that the quest for knowledge continues forever. That will help us to listen, tolerate and understand rather than become problematic in our society.