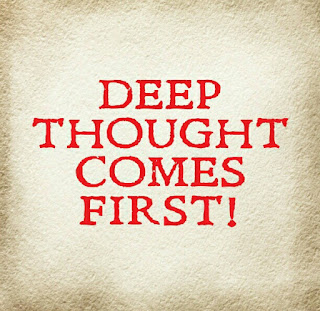 Have you ever thought about why you were born into this world without anything like weapons, tools, books or anything else but your mind?

If you've ever thought deeply about that
question, you may have understood that God, the creator, put us into this world with only our minds because that's really the totality of everything that we'd need to take decisions here on earth which would either sustain us or destroy us.


Everything you've ever done originates from your thought. It is impossible to take an action that you've not at least given a slightest thought to. Hence, it is very important to take our thoughts seriously because wrong thought processes will inevitably lead to wrong actions being taken.

Our minds analyse and process information just like a computer system. It needs time to come up with the best results. Taking sufficient time to think first before taking any action has proven to be very fruitful.

Once the mind is stimulated with the right information and allowed time to process it through deep thought, we usually come up with the very best decision.

Most people face various challenges and problems in their lives today simply because they don't think deeply enough. They usually approach their problems the same way other people do and they keep following the same pattern laid out by others.

This habit of following the crowd mentality kills the creativity of our individual thinking and we use our brains lesser and mechanically do what others are doing without deep thought.

I am thoroughly convinced that there is no problem in this world which cannot be solved by a clear thought process and a decisive action. None! Our problems are prevalent simply because very few of us think for ourselves nowadays. It appears all the thinking has already been done by others, so why bother?

We often forget that those who have solved problems and made wonderful innovations have achieved that by simply 'thinking differently' which is deeper than the surface. They didn't follow the laid out thinking pattern of their generation rather they applied their God given minds to think differently and consequently, they were rewarded with impressive answers.

Abraham Lincoln once said, "If I have six hours to cut down a tree with an axe, I'll spend the first four sharpening the axe."

I thought about the wisdom in that quote. Only a very smart person would consider that. Think about it for a second. Given that axe and the limited time, most people will immediately start trying to cut down the tree not minding of the axe was blunt.

Funny enough, these people would use all their energy to cut down the tree, but their hardest efforts would produce very little results and at the end of the day, they may not accomplish much.

But the smart person given the axe would first think deeply. Think about the best way to cut the tree down and the requirements needed. In this thinking his mind convinces him that he should take time to sharpen his axe so his work is made much easier. The result? He cuts down the tree with so much ease and little effort.

That is the reward of one who constantly utilises this precious gift from the creator to solve problems. He is always rewarded with extra time, wealth and health while the one who does not suffers for it.

The suffering itself is only there to point to the individual that he is not using his thinking ability effectively and should rather change his approach.

The mind is our most powerful weapon.

We must use it to solve our problems.

The boldwinner understands that in solving any problem, deep thought would always comes first before any action is taken.