DON'T BELIEVE EVERYTHING YOU'RE TOLD 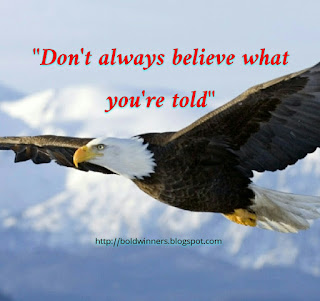 Once upon a time in a forest, a famer found an eagle's egg in a nest which had just fallen from a tree. He took it home and kept it in amongst his chickens under a brooding hen.  When the egg hatched, the mother hen
reared the eagle chick as if it were her own child.

Some of the birds would occasionally swoop down and say to it , "You are an eagle, you are one of us and you're the king of all birds. Come and fly with us."

And so it happened that this eagle lived and died like a chicken without every discovering who it really was.

Think about this story for a moment. This eagle totally conformed to its environment, lifestyle and beliefs without ever daring to take a risk, reevaluate itself and discover the truth about itself. It was even unwilling to listen to other eagles who totally recognised that it was indeed one of them.

Like this eagle, most of us believe everything we're told. We tend to think like most people and we usually want to believe what everyone else believes in. This leads us to lead a very mediocre life and in the end we end up just being averelse

There is a reason why we are different. You must not fit into the crowd, you must not be like other people. You have to be yourself, listen to yourself and take action  towards whatever you dream of.

All the successful people we know today all stood out because they did something differently. They didn't fit in. They discovered an entirely new way of perfecting themselves that no one else thought of. The leading scientists were able to challenge theories of their predecessors and discover new scientific facts.

We are not born to accept the norm, to be like everybody else and to believe in what everybody around us believes. You were born to stand out and be a shining light to your generation. If you become like everyone else, how will you effect change in your world?

That other people are doing something does not mean you should join them to do it when you don't want to. That everyone believes something doesn't mean that it is true. You must challenge yourself and the the things that limit you of you want to discover who you really are. You must be daring, bold and courageous.

Know yourself and excel.