FACE YOUR FEAR, LIVE YOUR DREAMS 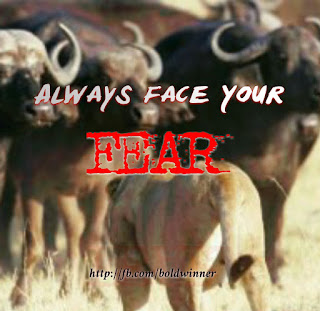 One day, a young buffalo named Jack approached his father and asked him if there was anything that he should be afraid of. “Only the lions my son,” his father responded.

“Okay, I'd be careful around lions. If I see anyone, I’ll turn and run as fast as I can,” said Jack. “No, that’s the worst thing you can do,” said Jack's father. “Why? They will kill me," asked Jack

The dad smiled and replied, “Jack, if you run away, the lions will chase you and catch you. And when they do, they will pounce on you and tear you apart”.

“That’s crazy, I’ll be too scared to do that. What if he attacks me back?” said the startled young buffalo. “Look around, Jack. What do you see?” Jack looked around at the rest of his herd. There were about 300 massive beasts all armed with sharp horns and huge shoulders.

“If ever you’re afraid, know that we are here. If you panic and run from your fears, we can’t save you, but if you charge towards them, we’ll be right behind you”.

The young buffalo breathed deeply and nodded. “Thanks dad, I think I understand".

Like young Jack, most of us are afraid to face our deepest fears. We'd rather run away and not face it squarely, but running away from our fears automatically means that we've lost.

We're afraid of many things: what people will think about us, failure, not meeting up with challenges etc. These fears often keep us trapped in the same situation and stifles our progress.

You cannot succeed without mastering your fears because it is only when we face then that we become free to make progress. Running away from it always loses outrightly.

Secondly, ask yourself, what's the worst thing that could happen? If I try to make that speech or crack that joke and I get booed of stage, So what? It's far better than not trying. It has offered you a platform to discover your level of mastery and improve your loopholes. The audience will probably laugh and talk behind your back for that day, then so what?

If you really love someone and you want to ask her out on a date, what's the worst that could happen? One of two things would happen: either she agrees or she would decline, tell you she's not interested and probably giggle. So what? Would you kill yourself?

If you want to invest in that business. One of two things could happen: You either land a good deal and rake in millions or you lose some money. If you lose some money, so what? Many multimillionaires have lost much money in investments before getting wealthy.

The thing is that fear of losing keeps us from trying at all. Not trying at all means we've lost, but in trying, there is the 50% chance of being successful and this 50% really counts. It involves risk of course, but people who want to be successful must be willing to take that risk rather let the fear of losing make them automatically lose.

If you don't face your fears, the chances of success are reduced to Zero. Not taking a shot at all guarantees 100% failure. A popular quote says "You miss 100% of the shots you don't take."

Being successful involves risk. The one who is willing to be successful must be daring enough to take risks. Always ask yourself what's the worst that could happen? If you can answer that question very well, you will understand that all our fears are usually baseless and focused on things that don't even matter.

It only matters when you're daring to get up after each fall and try over again. We must cultivate the persistent attitude of courageously facing our fears and telling the world that were ready to continue taking risks and that the fear of failing cannot stop us from doing so.

Fear can be a good motivator if we master it.

We must also accept the fact that in trying, we either win or lose.

Never let fear restrain your actions. Let it challenge you instead.