Why You Shouldn't Take Mockery Seriously 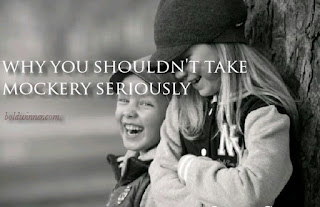 I have an awesome friend called Dave.  Dave is smart, intelligent and very funny. He is full of life, energy and fun. Whenever I'm around him,  I laugh a lot alongside some of his other friends. When Dave talks and you're looking at him, you'd  rarely notice his dentition isn't pretty nice because you'll be lost in his words.

Despite the way his set of teeth looked, Dave was never shy to speak, to crack his humorous jokes and just be a happy guy to be around with. He wasn't limited by it. He only smiled and cracked a joke about anyone who makes a comment about his teeth. He wasn't hiding it. He didn't let it make him stop being himself.

In contrast, I learnt about another guy who also had bad dentition. As expected, he was constantly jeered at by his peers because of that. This guy took it to heart, and rarely spoke in public. In his photos, he rarely smiled because he didn't want anyone to notice the way his teeth looked.

He became restrained and unhappy because he was limiting himself as a result of letting that bother him. He was someone you would rarely be around with because he hardly laughs. He was too conscious of his teeth. It wasn't good for him.

Assuming you had bad dentition, which of those guys would you rather be? Dave or the other guy? Your guess is as good as mine. It's Dave of course, the young chap who kept on being happy, having fun and making lots of friends by being himself and not letting that little predicament limit him.

This is just an example. There are many things about you that other people can make mockery of. They may say you're too tall, too short, too fair, too dark, too slow, too fast, stammering, ugly, and lots of all other words that could be used to make humor or just ridicule you. You don't have to take it seriously. You don't have to let it get to you or make you stop being who you are, free and happy.

Being short doesn't limit what you can achieve. Kevin Hart is short. He's a well known celebrity, he's celebrated and very successful in his career, despite being short. If he had allowed comments about his shortness to bother him, you think anyone will know about him today?

People go on feeling bad about what other people said about the way the look which is so unnecessary if only they loved and accepted themselves. It's not the mockery that makes people believe negative things about themselves. It's their latent low self esteem. So they tend see such words as an attack on themselves. If only they knew themselves, they won't be bothered at all.

There's no point trying to hide yourself or your looks because people are commenting negatively about it. When they comment, keep on being yourself and keep showing up. Keep showing yourself. Keep living. They will get used to your looks and get tired of making mockery of you.

If you let them make you crawl inside and hide yourself, then you've lost the game. Their comments should inspire you to keep showing up, contrary to what they expect. Keep showing up and being yourself. Ignore those negative comments aimed to bring you down. Surprise them by staying happy despite all they may say.

We can't totally stop people from mocking or making jest of us sometimes. That's the way life is. You can't stop people from talking about you. You'll have to stop them from talking altogether which is impossible. People are too occupied with their own personal lives and interests than to care about how you will feel when they mock you.

Some may mock you without any bad intentions. Just for laughter and fun. Being mocked by others doesn't make those who mock us bad people. We only need to know ourselves and see that these mockeries shouldn't be taken seriously at all.

Take your mind off mockeries and rude words. Love yourself first, love others and keep winning.