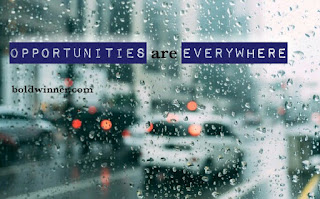 Early one morning, I left for a program in town because I wanted to beat time and traffic. I never knew that the clear blue sky was a disguise.
Enroute my destination, the sky started growing dark. When I first noticed it, I thought to myself "Damn, I'm in for this".. because I didn't come out with my umbrella or even a rain coat.

Few minutes later the rain poured down.. I was inside the bus thinking of how to alight when we get there before my thoughts were interrupted by the driver "Oya come down everybody.. Come down" he yelled.

We were already at the bus stop and unluckily for me, I was the last person to come down. That meant that the few nice spaces left under the shades where others were already standing were quickly filled up.

As I stepped down, the rain baptized me momentarily and I moved helter skelter looking for a shade. Some people were kind enough to make some room for me in front but the rain was still touching me although it was better than directly staying under it.

As I stood there wondering, I saw this young enterprising lady from nowhere. She came to the bus stop where passengers had filled up and started selling nylon raincoats!

Wow.. what an idea and what a perfect time to make sales! People were rushing to buy it. Some wore it immediately and jumped into the heavy rain like that. The girl was really a smart salesperson to spot that need.. she was quick to identify it and sold almost everything.

It's important to note that while others may be seeing the rain as an adversity or disturbance, she saw a vital business opportunity there and capitalised on it.

That same day as I finally got closer to my destination, I headed into a small shade close by to do just that when I met a young man. I said "Hi, what's up?" He also responded with a friendly greeting and we started talking about the rain in English (I speak English or pidgin to strangers). I learnt he came into the state in January without knowing anybody and was hustling by shuffling between jobs. He was currently working as a security agent in the area.

I was impressed and spoke about myself too. As we talked, I discovered he was closer to me than a stranger. We hail the same state and part of the country and we shared the same native language.

Meeting this guy offered an opportunity to get to know him. If I didn't speak at all to him or if I ignored him, I wouldn't really have gotten to know that we were even connected closely.

Opportunities are everywhere. Train your mind to find them and use them.