Nobody Shows You What Happens Behind 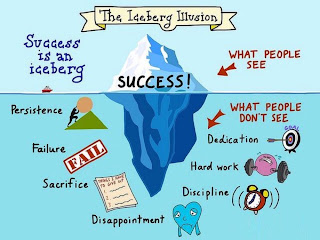 Nobody will tell you that they have been applying to various opportunities and getting rejection mails..☹️ you will only hear the good news when the opportunity finally succeeds.🙂
.
Nobody posts their ugly pictures 😣 on Facebook or IG.. they won't tell you how many pictures they must've have taken and deleted before settling for the one they finally post for you to see.😁
.
Nobody tells you how many times they feel low, how many times they cry in private or how many times they feel like shit.😖 But whenever they come out to the public, you get to see happy, lively, charismatic and smiling faces.🕺🏽
.
No one posts pictures of when they were reading or studying hard to pass in school. But when the results come out, you will be the first to hear who got A, who got first class.. etc
.
The entrepreneur will not tell you how many times he felt like quitting 👎🏼during the early stages of his business..but when the business kicks off.. you will hear the net worth of the company!👍🏽
.
A guy won't tell you when he was having sleepless nights and semi heartbreaks trying to woo his girl.💔 But when the time reach, na the wedding invite you go see.💞
.
Point is.. we live a world where we mostly only get to see just the good end result of stuff. We usually don't get to see the full picture of what happens on the background or that failures even happen.. And that's why some people begin to erroneously think that things are easy for some people because they don't even know what is going on. They just assume.
.
If you are allowed to know the full story behind most of the success stories that we like to hear, you will be surprised. You will see that there is really no point of feeling that you've not gotten there yet. 🤷🏼‍♀️You will even not see the need to envy anyone because everyone has got their own story.
.
It's a wake up call to everyone who has allowed the things they can see to make them feel like it's their own situation that is the worst. There's a quote by Rafiki in Lion King I really like. He said "Look beyond what you see". Whatever you may be presently seeing is not really as real as what you believe and work towards achieving.
.
Focus on doing your own little best in your own little world. If you're facing difficulties, know now that those difficulties aren't peculiar to you! The people who seem to be enjoying those things you want to enjoy today have faced those same difficulties before getting there. It's not something you can jump or hurry towards.
.
If this post makes sense to at least one person, it has served its purpose.
#Nigel