Failure Is Usually The Shortest Path To Success 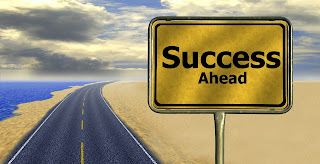 Sounds crazy right? You might be wondering how failure is usually the shortest path to success. All I have to tell you now is this: "Take some few minutes to carefully read this article to the end and you will know why it was titled that way.

I'll begin with a personal encounter:
"All my life, I've always tried to be the perfect guy. I never wanted to fail in anything I did, so if I  thought there was a possibility of failing at anything, I just avoided it entirely.

The turning point came in my life when I realized that failure is also a path to success. In short it seems like the shortest path. Because when you fail in doing anything, you simply become better at it despite any shame or embarrassment associated with that failure.

It is when you look at the shame that it hinders you. When you are able to learn your lessons and your eyes are opened to the change that has taken place within you just by making that first attempt knowing you might fail, you will see the light in failure.

So I learnt how to try things out even when the chances of failure were glaring. Sometimes I succeeded, sometimes I failed. But the failures never mattered to me anymore because I saw the beauty of the change that it was working within me."

Like I was, there are many people in the world today who are too afraid to fail. They just avoid trying anything out because they are afraid of many things. They don't want to fail and become a laughing stock.  But they forget that staying idle without trying anything is even what makes one a real laughing stock!

There are accomplished public speakers and comedians who were utterly embarrassed and shamed the first time they tried to do anything in front of a crowd. It was failure to them as at that time. But what they experienced had contributed in building them up to where they are right now.

If you're learning a new skill or how to solve a problem, you will often fail as you are trying it for the first time, but as you get used to it, you become better. You wouldn't have been better than you were if failure wasn't there to test and challenge you in the beginning.

If you're learning a dance step or musical instrument, of course you will fail at it as you learn, then master it with time. Gaining mastery of any art or business is passing through and getting used to lots of failures. Those who are accomplished experts in their fields are those who have faced a lot of challenges disguised as failure, yet surmounted it.

We despise failure so much in our society that we fail to see that failure is inevitable to succeed. They are two sides of the same coin and always working hand in hand. You need to fail in order to succeed. Failure builds your success!

The more available you make yourself in the face of failure, the higher your chances of succeeding. But by locking yourself up and not attempting to try new things or break new grounds in your life, you will still find yourself trapped in the same position.

Don't despise failure and do not despair whenever you encounter it in your honest endeavor.. Give thanks that you had the opportunity to fail and you are made better by every failure. Your success isn't far away.