9 Life Lessons From The Game of Chess 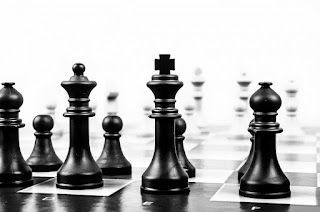 Chess is a wonderful intellectual game. It is not merely an idle amusement as wrongly believed by those who may not understand the beauty of the game. It is a game in which several wonderful capacities of the mind can be developed.

Many things happen on a chess board from which we can pick vital lessons that could help us in our daily lives. It is almost eight years long since I learnt how to play chess. And so far so good here are 9 life lessons I have learnt from the game:

This one comes first because I feel it's the most important lesson I've learnt from playing chess. Many times when I play with stronger players and find myself in a bad position, I tend to easily lose hope. I'm like "What's the point?" "The game is already lost."

But as I advanced in gameplay, I stopped giving up easily when I've made any errors or when I appear to be losing. I just focused on playing as best as I could given the situation. In doing this, I often found many other opportunities which helped me to bounce back into the game and gain an upper hand.

I realized that any mistakes I made wasn't the end. Despite my position, I should focus on making the most of my moves. And I have applied this lesson to life to liberate my mind from depression.

In chess, the queen is the most powerful piece on the board, not the king. The queen can move in any direction and for longer distances. While the king has one step to move around it. Though the king is the most important piece, it has limited mobility.

I have often asked why this had to be so until the message became clear to me. Women are powerful influencers. Hell hath no fury like that of a woman. The place of women in the society and their capacities even though they may look physically weaker must never be underestimated.

And if you take a peek at history, the downfall of most great and powerful men were simply orchestrated by a devious woman! The creator of chess must have had these in mind before creating the game.

So it implies that of you want to succeed and make any form of progress in your life, you must make a move. You must use the resources you have and move/manipulate them to achieve your desired results. Failure to do anything will keep you trapped in the same situation.

You see many people pray all the time for God to bless them, but they don't make any moves towards what they want. They pray from January to December and nothing happens because God is probably waiting for these guys to just make a move.

4. Attack is often the best form of defence

While playing chess, I have often found myself in dangerous positions when my opponent is launching very aggressive attacks on my side. The attacks are well sustained that oftentimes the first thought that comes to mind is to run back and defend my territory.

But experience taught me that the best way to defend is to also carry out strong attacks on your opponents side. When you learn to also launch deadly attacks instead of just defending, your opponent will have a hard time continuing his own attack because he has to attend to his own territory.

Don't always be defensive in life. Don't always relax and wait for things to be given to you or just happen on its own accord. You should learn to attack. Make plans and carry them out. You will stand a better chance of surviving when you attack sometimes in response than when you always crawl back to defend.

5. Consider or think about the future

Foresight is a lovely attribute of the mind that you learn from chess. In playing the game, you have to think of what your opponent is planning to do and also think up of various plans you can use to defeat your opponents.

You think about the future consequences of the move you want to make and how better or worse it will make your position. You're careful responding to your opponents move because you have to try and see the future moves they are planning.

In life, many of us have made terrible mistakes because we don't really think deeply about the actions we take presently. I have written extensively on this here. Chess teaches us to remember the future before making any moves in life.

6. Understand your situation or position

Chess teaches circumspection. The ability to consciously observe, understand and analyze your position very well before moving. If you don't understand your identity, situation and position in life. You may not really be able to achieve anything meaningful.

You must understand your situation and that begins with how you know yourself, your tribe, your history, your community, your race, your continent etc. When you have known this about yourself. You can then take time to learn about other people, cultures and beliefs.

Wherever you find yourself in life, take time to study and understand the environment. Get access to important information and always update your knowledge of what is happening around you. It is a key ingredient to living successfully.

Opportunities they say comes but once. Although on a chess board opportunities usually arise, it is important to take advantage of the opportunity that you are presently aware of rather than gambling with it. I have had opportunities of taking my opponents unguarded pawn and I usually did. It often proved sufficient to finally win in the end game.

The truth is somebody else will take advantage of the opportunities you missed. And in chess, it's your opponent. So it's important you learn to quickly recognize and make good use of opportunities that come your way whether on a chessboard or in real life.

8. Time is one of the most valuable resources

Is there any other game that could better teach you the precious value of your time? Chess is a game that greatly valued time. Once your time is up in chess, no matter how good your position may be, you will inevitably lose the game.

It teaches you how best to manage your time and make the most use of it. We all believe that our timeline on this planet is limited. And every second counts. So wasting time is usually not good. Time is meant to be managed and used well.

Chess isn't really a game that we say is dependent on luck, just as in rolling a dice. Chess is a game of strategy and tactics and luck has a little role to play here because, whatever happens on the board was created by your moves.

When you are a good player(one who is thoughtful, careful, resilient and determined), you will always be lucky. You won't be lucky in the sense that luck just happens. You will be lucky because you created your luck by playing very well from the beginning.