Where Do You Belong In These Two Classes of People? 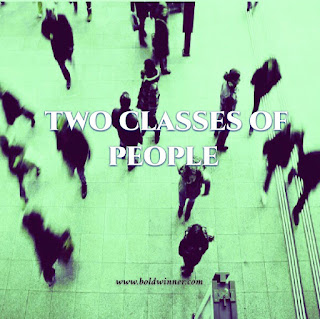 The people who make up entire population of the world can be divided into two simple categories: those who do and those who don't. As a living human being you belong to one of these categories depending on your approach to life and the choices you make. Let's look into the two classes.

The class of "those who do," are confident, happy, determined and very successful people. They love to do things and take control of their lives. They don't necessarily have to depend on anybody or anything in order to achieve their goals.

No matter how things are, "those who do" find a way to do something about it once it is in their power. They recognize that they have a choice and in whatever they face, they simply find their way through making smart choices and taking actions that they need to take.

You don't find this class easily telling their problems to anyone or grumble about other people or bad situations around them. They may talk about it occasionally, but only for very brief moments because they know that unnecessary complaints don't achieve what they want. They know what they do is what actually achieves it, so they keep doing.

"Those who do" tend to always become very successful in life because they obey the principle of life; you have to give to get. They give through their actions and earnest efforts to make a contribution and they are definitely rewarded for it. They are happier because they always reap the fruits of what they have done. They know it's in their hands.

The other class of those who don't are actually the opposite. You find them expressing dissatisfaction and resentment towards other people or conditions around them. They easily blame those things for their present predicaments instead of doing anything about it. That's why they are usually sad.

They tell their problems to almost everyone thinking that other people really care about their complaints. They forget that other people are struggling with their own problems as well and looking for a way to solve them. This class believes that the world owes them something for nothing. They fail to recognize the world works like an input to output system.

They are usually not successful people. Not because they can't be, but simply because they waste the time they could have used to start doing stuff on things that are unimportant.

So ask yourself, which class do you belong? Compare the characteristics of the two and see where you fall into. Bold winners are those who do. Those who take control and create the life they want. If you're on the wrong class, kindly make necessary adjustments and join those who do.