Don't Try To Be Too Nice 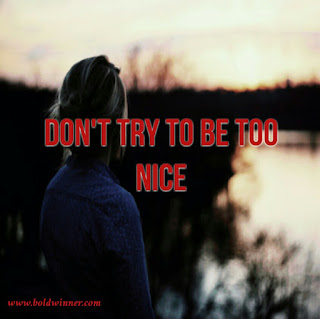 In today's society, some people try to appear too nice and overdo things in order to win the love, respect or admiration of other people. Ironically, it usually turns out that they get the opposite of what they want because they were trying to be too nice.

Think about this: Parents who keep on letting their kid have whatever he or she wants end up spoiling that kid no matter how generous they think they are. The kid grows up not knowing that some things are not good for him because the parents had not disciplined him properly. And why's that? They were trying to be too nice.

You own a pet and all the time your pet keeps on peeing in your living room. You don't want to punish that pet by using some strict training practices because you claim to love the pet and you're trying to be a nice pet owner. What happens? The pet goes on misbehaving and causing problems for you.

You're in an abusive and unhappy relationship. Your partner keeps on doing the things you don't like. He may beat you up, cheat, and do all sorts of things to show a lack of love and non commitment. But you keep on trying to defend him, you don't want to show that you're actually unhappy with their behavior. You keep quiet and keep tolerating crap because you're being too nice. What happens? They keep doing it.

Okay, someone keeps on harassing you and keeps on troubling you. You have done nothing wrong to them, but they seem to derive pleasure in interfering with you and your life. You keep trying to ignore them because you're a nice person, but they keep on looking for your trouble. Would you go on ignoring them forever because you're too nice?

It is unnatural for us to be too nice. We should be nice people, but when we take it to the extreme, it could be a limitation or a sign of fear. You have to try and relate very well with everyone, but don't try to be too nice to the point of tolerating nonsense from anyone, anything or any situation.

Do what you have to do and learn to express what you really feel instead of holding it in because you're trying to be too nice. If you've got to punish your kid or deny him some things, please do so. If your pet misbehaves, discipline it appropriately.

If you are in an abusive relationship, come out of it for your own good. If the person really loves you, they will come to their senses else, good riddance! If you have to confront some troublesome people, do so and let them know you're tired of their crap.

If you're not happy with anything, don't try to pretend in the name of being too nice. Just be natural and do what the situation really calls for with smart reasoning. You will find out that if you don't try too hard to be nice, but rather do what you have to do, things will gradually fall in place and work out well. From better responsible kids, lovers and pets to a better and happier life filled with genuine people.