An Experience With The Pie 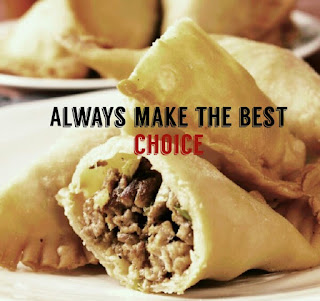 Today's Article was inspired by my personal experience when I wanted to buy a meat pie. I was really hungry and looking for some snack to devour when I decided to go for the pie.

The seller was a young lady probably in her late twenties and I learnt the pies she sold were tasty. So I ordered for one pie and she quickly selected one of them from the pack, wrapped it quickly and handed it over to me, so I didn't really get to see the pie she selected.

However on collecting the pie, I felt that it wasn't really a complete pie. It was way shorter than the other ones from where she had picked and some parts of it had already broken off. So she literally handed me half of what I paid for.

There were two choices here: To accept the half pie and make payment just like that since she had already wrapped it up or to really demand for a pie that's worth the money I'm to pay. Of course, I preferred to make the best choice of getting full value for my money.

So I politely told her that I wasn't really going to accept that pie and I requested for a better one. She tried to argue that it was all the same and nothing was really wrong with the pie. At this point of some resistance, certain people would simply have agreed with her just to "avoid creating any issues."

But here's something you must know: If you really want to achieve, get or have anything, you must be willing to continue going for it no matter what others may think, say or or do. If you want to avoid trouble or if you tend to consider too much of the risks, problems or outcomes, then you don't really want that thing.

Well she had to smile, return the pie and offer me exactly what I wanted to satisfy my appetite at that point. I smiled back at her and made my payment. And that's how it ended.

That short event got me thinking. What if I had accepted the other pie just like that? Who's loss would it be? What if I hadn't insisted on a better pie? Would I have derived the maximum utility I derived after consuming it?

Choice came to mind once more. You have choices. You know exactly what choices you prefer and those you distaste. Don't let anything make you go for something lesser than what you desire. There's no better feeling and guarantee of happiness than having exactly what you wanted. None.

Bold Winners are of high self esteem, they are also happy and motivated because they make the best choices and go for exactly what they want.

Go for what you want, be happy and keep winning!