Go Into The Arena 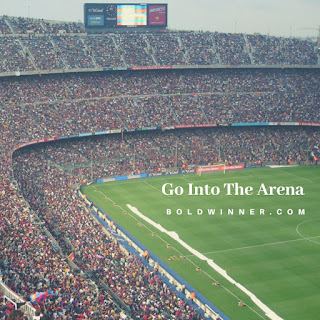 After the final game of the 2018 FIFA world cup played yesterday between France and Croatia, many folks were arguing about the things Croatia could have done to win the competition.

They really over criticized many players. Many of them had failed to understand that being a football player in the arena is way different from watching a football game from the sidelines.

Being in the arena and actually doing what is expected of you is not always as easy as it sounds to onlookers. That's why it's not best to criticize other people too freely if we've not tried to put ourselves in their shoes by going into the arena.

It's easier for many people to laugh at someone who made a mistake during his or her speech. It is easier to say, "Oh, that speaker is really boring us to death!" or even too boo him or her off stage. But it's really not so easy for many of us to put ourselves in the arena to do better than those people.

In life, criticism is important and necessary for us to grow. However, it is important that we don't criticize others without some degree of empathy. We must understand that those who make mistakes are those who were willing to make a difference by putting themselves in the arena.

We must understand the effort they are making by at least being in the arena instead of staying idle and we must accord them the necessary respect. However, that doesn't mean we should embrace mediocrity and never criticize them. We should criticize, but give them some credit for making the effort to be in the arena.

Being in the arena is behind every major progress ever made in the world. It is those who have been in the arena that led change and created circumstances that rapidly transformed things.

So as a bold winner, you must push yourself into the arena. Don't relax in comfort. Strive to always be better than you are. Don't fall into the trap of criticizing people blindly without consideration. If you must criticize, always be conscious of the fact that the person you're criticizing deserves some credit for actually being out there for you to see.

When you are playing in the arena, be aware that people will criticize you. People will say negative things about you even when you're giving your best. People will want you to fail, just because you were bold enough to be in the arena. People will look for reasons to say something bad about you. But just remember one thing: "Being in the arena actually puts you way above everyone of them."

Don't look at the naysayers.. Listen to the honest critics and try to improve yourself. But never listen to those who have refused to see anything good in you. Focus on continuing to play your best in the arena and you will find out that your best will continue to evolve.

Go into the arena, transform the things that you're unsatisfied with and keep on winning!
Motivation